Cruising For Bad Boys & Round Robin 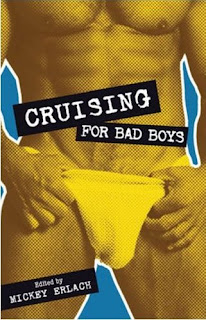 In his third STARbooks Press anthology, CRUISING FOR BAD BOYS, Mickey Erlach leaves the cozy confines of the bedroom to seek out sex in the riskiest of locales. Have you ever seen a man in a suit at a truck stop? A preppy frat boy in a public park after midnight? A nerdy man walking down the street in the wrong part of town? They aren't lost. They're looking for bad boys, and when they find them, the fun begins. The best part is when the suit and glasses come off, and the trick is no longer the wildest one in the room … or in the park.

As an added bonus, CRUISING FOR BAD BOYS, edited by MICKEY ERLACH, features the bonus novella, MY FATHER'S SEMEN by MYKOLA DEMENTIUK, the disturbing story of a young man who seeks out his biological father only to be forced to survive the one way he knows how. This story will open your eyes to life on the streets of New York in the 1980s and will surprise you in the end.

You can buy your copy at www.Starbookspress.com

“Oh my God.” Matthew backed into the wall nearest the door. A hysterical burst of laughter spilling from his trembling lips as he slid down the wall.

Cole crouched in front of Matthew and rested his hand on the younger man’s shoulder. “Hey, it’s going to be all right. I meant what I said; you’re welcome to stay here with me and work at the store. You don’t need Tyler.”

Matthew blinked up at Cole, a tiny frown between his wide, blue eyes. “I know that. And I appreciate the offer. I do. I just… Jesus, that was anticlimactic. I always half believed Tyler would rather kill me than let me go, no matter what he said to the contrary, and then all it took to get him to back off was you twisting his arm.” Matthew shook his head. “Fuck, I’m an idiot.”

“You’re not an idiot.” Cole inched closer and wrapped his arms around Matthew, trying to absorb some of the stress shaking his slim frame. “You were just a guy trapped in a bad situation, but it’s over now.”

“Thank fuck for that.” Matthew’s arms snaked around Cole’s waist, holding on. “I don’t know how I’ll ever be able to thank you for everything you’ve done, but…”

Tension surged through Cole. He released Matthew and eased out of the younger man’s embrace, ignoring the hurt and confused expression on Matthew’s face. Before they could move forward, whether it was as friends or lover, they needed to get a few things straight, starting with Matthew’s need to keep offering his ass to Cole. “You don’t owe me anything. You don’t have to keep trying to whore yourself out in order to repay me for something anyone with a single shred of morality would have happily done for free. I’m not like the other men you’ve been hanging around.”

Matthew snorted. “Spare me the holier than thou routine. I wasn’t trying to get you to fuck me again.” He climbed to his feet, looking down at Cole.

Cole followed suite, although he kept his distance. “I’m sorry. I just assumed—”

“You assumed I would be foolish enough to offer you something you clearly have no interest in. I know I’m used goods. That doesn’t mean you have to get off on rejecting me, time and again. I’m not too proud to take you up on your offer of a job and a place to stay, at least while I’m getting back on my feet, but it’ll be a cold day in hell before I make another pass at you.”
Posted by Amanda Young at 1:05 PM