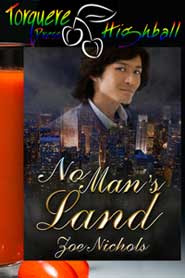 No Man’s Land
by Zoe Nichols
It’s been two months since Asher’s boyfriend, Derek, lost his bar to a fire and Derek only seems to be slipping further away into a private hell. Lost and watching his boyfriend fade away, Asher fights helplessness while Dean tries to keep them all from falling apart.

"You're so damn blind, I could stab you," Derek muttered, and the bitterness beneath the words shocked me stupid.

"What?" I could feel myself gaping at him. "What the hell are you talking about?"

He shot forward, startling me into a backward run, but his hands closed around my arms, almost hard enough to hurt, and jerked me to a stop. "You idiot, it was never just about my bar." He shook me gently, despite his fierce grasp. "It's about you. It's always been about you."

I stared. I could hear Dean in my head, on a cold winter night forever ago, saying much the same. But I fought anyway. "You're confusing me. None of this is about me. You're the one who said you weren't ready to open another bar."

Derek snorted, dropping my arms. "Because I'm scared shitless that it'll happen again. I almost lost you. You, not my bar. Fuck, yes, I miss it, but you're so much more important." His hand shoved through those haphazard blond spikes. "If you'd died, I'd have died right fucking with you."

"Yeah, but you almost weren't." I stalled at that, but I guess he didn't see because he started pacing, hands moving. Drilling his point home. "I sat in that hospital for three days, watching you fade in and out. Knocked out clean, God knows how you managed to avoid a fucking concussion. Going out of my mind because it happened in my bar, my bar and I didn't stop it in time."

My heart thundered in my ears, and a huge chunk of me was calling myself nine kinds of a jackass. I groaned, covering my face with my hands. "Shit, Derek. I didn't even think of that." Made perfect fucking sense. Put in his shoes, with him the one recovering, I'd be a mess,too.

"Of course you didn't. Because I'm a selfish fuck, right?"

I jerked my hands away from my face only to have my glare shut down by the tired look in his eyes. I sighed, dropping my hands and bowing my head. My hair spilled forward and created a curtain, blocking me from him. The silence that fell between us was tense but fragile, like a glass sculpture with a crushing weight hanging above it.

What could I say to that? I'd all but accused him of it, hadn't I? My stomach twisted around that jagged bit of truth.

Holy shit, I was such a dumbass.
Posted by Zoe Nichols at 3:57 AM

hey Zoe! I bought this and finally got a chance to read it last night....and loved it! Asher is one of my favorites, and I am SO glad you ended the book the way you did, cause I was hoping for exactly what happened...yay! Congrats and....is there any chance for more Asher anytime?????