I'm super excited to share Charlie and Gavin's holiday romance with you all. I wanted to write a holiday story that has angst and emotion and isn't solely fluff. My goal was also to make it sexy and hot, but to include those warm and cuddly holiday feels as well. I hope I've succeeded. :) 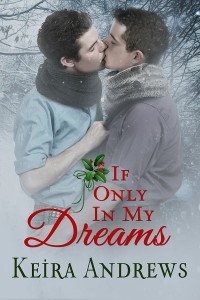 To be home for Christmas, they must bridge the distance between them.

Charlie Yates is desperate. It’s almost Christmas and his flight home from college has been delayed. For days. Charlie promised his little sister Ava he’d be home for her first holiday season since going into remission from leukemia. Now he’s stuck on the opposite coast and someone else grabbed the last rental car. Someone he hasn’t even spoken to in four years. Someone who broke his heart.

Gavin Bloomberg’s childhood friendship with Charlie ended overnight after a day of stolen kisses. With years of resentment between them, they don’t want to be in the same room together, let alone a car. But for Ava’s sake, Gavin agrees to share the rental and drive across the country together.

As they face unexpected bumps along the road, can Charlie and Gavin pave the way to a future together?

Posted by Keira Andrews at 7:39 AM No comments:

... until release day! That's right, November 25 is just around the corner. The day before American Thanksgiving, in fact, so believe me when I say that Chris and I are EXTRA thankful this year!

(Ignore the fact that she's actually Canadian and doesn't celebrate American Thanksgiving. She will celebrate it through me.)

We have three gorgeous new covers for all the Never Too Early books, and you can now get them IN PRINT! Links here:

And the cover for Never Too Early: Full Circle (currently available for preorder) is just as beautiful as the other two. Huge props to Kris Norris for her hard work! 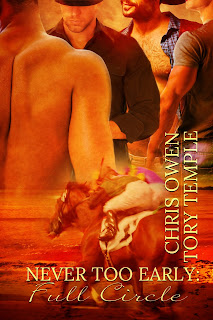 Be sure and tune in to the Romance for the Rest of Us blog on Wednesday. Chris and I will be hosting, sharing some stories about writing this series together, divulging tidbits about Jake and Tor and Chance and Tucker, and answering questions. Looking forward to seeing all of you there!

I hope everyone is having a good November so far. I can't believe that we are already into the second week of the month. Time is flying by!!

I have some good news. My Christmas themed M/M story "Under Wraps" is currently in the works to be released by the end of the month. No exactly release date yet, but I'm excited it's found a new home and the upcoming adventure of semi-self publishing. :)

Posted by Unknown at 3:24 PM No comments:

Another beautiful autumn Sunday here in southern California! At least the nights have finally turned cool, if not the days. All those meteorologists keep warning us that El Nino's on the way, but we're stil waiting.

It's finally release month for Chris Owen and me and we couldn't be more excited! The final installment of the Never Too Early series will be out on November 25. All three books will be released in print with all new covers! Our cover artist is super talented and did an amazing job and we can't wait to show them off. Stay tuned here or to our Facebook pages over the next few days for the reveals.

I'll leave you with the last little tease you'll get before Never Too Early: Full Circle comes out on November 25.

Chance was quiet for several minutes. A woodpecker in the front yard tree gave its high-pitched tweeting call before busily getting back to work.

"I definitely was not prepared," he finally said. "And I know Tuck wasn't. I'll have to really sit and talk with him to see what he thinks. I can't decide if us leaving today is a good idea or a shitty one."

"I'll miss you either way," Jake said. "I don't know Tucker well enough to know how long it takes him to think things through, and he might be uncomfortable being here. Which would suck. But you guys leaving and not being here to sort it all out sucks, too."

"There isn't much of a choice," Chance sighed. "Our flight is at two. If I didn't have to attend a meeting at headquarters tomorrow, I'd try and change it. But we -- well, at least I -- need to get home."

"I know." The distance sucked, and the fact that everyone had responsibilities they couldn't shake off was both a good thing and a bad thing. It made for good people, but it made it difficult to handle issues as they came up. "Maybe the four of us can make this morning a good one, and everyone will feel better by the time you leave. Even if things aren't completely settled, maybe they'll be better."

"It'll be better right now if you kiss me like you mean it."

Jake smiled and set his coffee mug aside. "Like I mean it?" He touched Chance's cheek and kissed his mouth softly. "More?"

Jake gave him more, the smiles fading as the kisses deepened and Chance's mug was put down as well. They turned to each other, and Jake would have happily let his coffee go cold if he could stay right where he was for an hour or so.

Chance didn't seem inclined to go anywhere, either. He put both hands on Jake's face and held him gently as he pressed light kisses to Jake's forehead, cheeks, and bridge of his nose before returning to Jake's mouth with a sweep of his tongue and a slight nip. "I'll miss you," he murmured into Jake's ear, then sucked Jake's earlobe into his mouth for a split second.

"One of these days I'll ask you not to go," Jake whispered back. "Someday we'll stay together." Jake had no idea how that would work, but he knew that he wanted it.

Chance pulled back and looked at him, eyes soft. "Maybe someday we'll work it out."

Jake nodded and kissed him again. He was about to say something even more honest and probably embarrassing when the door opened and Tor said, "So, you two don't need more coffee, then?"

Posted by Tory Temple at 4:34 PM No comments: