So a cowboy and fireman walk into a bar...

Well, here we are at the end of April, and I hope it's safe to say that the East Coast's horrible winter is finally gone. I was lucky enough not to experience it personally, but the pictures alone were horrifying.

I signed a contract last week! I think it's finally time to disclose what my co-author and I have been working on for a really long time. A while back -- okay, eight years back -- my bestie Chris Owen and I wondered what would happen if we decided to write a mash-up of two of our most popular couples. What if Jake and Tor from Bareback happened to meet Chance and Tucker from Heat? Would cowboys and firemen have anything in common? Would they be friends? There were so many questions. We started out writing something just for fun in our spare time, just to see what would happen.

Well, it grew. The little "for fun" story we were writing for our own amusement got longer... and longer... and longer, until it finally topped out around two hundred thousand words. When we stopped, Chris and I realized that the book had evolved into something that needed to be shared. It was a good book.

We broke it up into three smaller, more manageable novels, submitted the first one, and held our breath. Would our publisher be okay with two authors putting popular couples together like this? The answer, thankfully, was yes. Contract has been signed.

Look for the first novel in a three-book trilogy to be out sometime in the next six months. This has been eight years in the making, and we promise you that Never Too Early: The Beginning will knock your socks off.
Posted by Tory Temple at 2:29 PM 2 comments:

Blog Hop and Other Stuff

I participated in a blog hop recently that is all about one's writing process. If you've been curious how mine works (or doesn't) you can check out my contribution to the hop here.

As part of Rainbow Gold Reviews' celebration of historical romance, you can win a FREE copy of my book The Station: 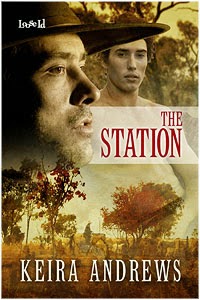 Ever since Cambridge-bound Colin Lancaster secretly watched stable master Patrick Callahan mastering the groundskeeper, he's longed for Patrick to do the same to him. When Patrick is caught with his pants down and threatened with death, Colin speaks up in his defense, announcing that he, too, is guilty of "the love that dare not speak its name." Soon they're both condemned as convicts and shipped off to the faraway prison colony of Australia.

Patrick learned long ago that love is a fairy tale and is determined that no one will scale the wall he's built around his heart. Yet he's inexorably drawn to the charismatic Colin despite his best efforts to keep him at bay. As their journey extends from the cramped and miserable depths of a prison ship to the vast, untamed Australian outback, Colin and Patrick must build new lives for themselves. They'll have to tame each other to find happiness in this wild new land.

Posted by Keira Andrews at 9:35 AM No comments:

Torquere released two previously published works of mine and I'm delighted about both of them! The first is a collection of my short stories.

Whether a fairy tale or a story grounded in reality, there is room for romance anywhere. From the secluded hospital bed to the back room of a tattoo shop, that spark can be found in the most unlikely places. This collection of stories will take you to four very different spots as the men within discover that love turns up in unusual ways. A tattoo artist, a hospital worker, a set of white wings, and ghosts in the attic all await the reader in this unique collection.

You can get the Tory Temple Collection RIGHT HERE.

The second release was from the Kegs and Dorms anthology, so if cute college boys are your thing, then definitely check this one out.

Maxwell has been looking forward to college for the last two years. Finally at the university of his choice, school is everything he hoped it would be, especially the fraternity he's decided to rush for. It doesn't hurt that one of his fellow pledges, Devin Page, is really good looking and likely into guys, if his flirting is any indication. But what Max finds out pretty quickly is that things are not always as they seem, especially when it comes to cute guys. Devin has a very specific set of rules for what is supposed to happen at college. Max is hoping for more than just rules to define what they have together. Will the two of them be able to find a common subject to study, or will their budding friendship take the road to failure?

What it's All About is available RIGHT HERE.

As for new stuff, stay tuned. A finished novel is being sent off to my editor today! This one is going to be pretty special, so I'll explain more next time. Have a good one, slashers!
Posted by Tory Temple at 10:00 AM No comments:

Not the theatrical kind, which is more common in my life, but the baseball kind! My team opened the season on the road this year, so we've had to wait an extra week for them to come home to play. (Boo! *pout*) I won't be at the sold-out game, alas, to watch those tight-panted young men run the bases, but I shall be watching from home. It's a bit of a springtime ritual for me to make a dinner in keeping with the day (baseball-geek-meets-foody), whether it's the classic hot dogs and apple pie or a homemade version of Ivar-dogs and slaw. I believe last year I bought sushi for the occasion. (Yes, at our ballpark, sushi is an option.) This post about some of the new menu items is making me hungry already!

Posted by Maia Strong at 1:19 PM No comments:

Over a family vacation to Florida, I managed three runs and two 20k step walking days over the course of a week. No pain. None other than the usual tired muscles and exhausted mind. After all the ups and downs I’ve had over the past couple of years, I shouldn’t get excited, but I am. A three run in a week streak hasn’t happened since I broke my foot, never mind those heavy walking days! I had another great run this morning, too, and I’m registered for a 5k race next weekend. I might hit a “down” again, but that won’t slow me now. It feels great!

I have more to share from the vacation, including the run of Solo Flight up ARe’s Best Seller’s list, the termination of my relationship with Silver Publishing, and a new Day Job. I’m still unpacking, doing laundry, and making up to the cats who won’t leave my side for more than a few minutes since my return, so I’ll be sharing more on my website later, throughout April.