This year I took part in the Goodreads M/M Romance Group's Love Has No Boundaries event, featuring a summer of free stories written by authors in response to reader prompts and accompanying photos. This was my prompt and photo:

I could look at him all day. But sometimes, when he thinks I’m not looking, he seems so sad… 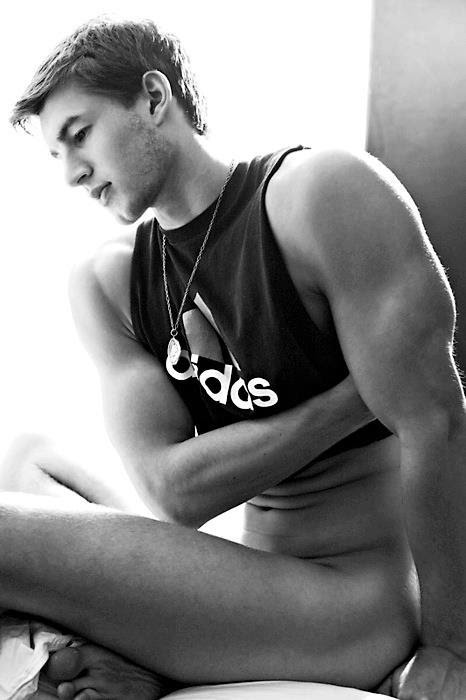 Pensive, pretty, and not wearing pants.

Some readers discussed that he looks like a swimmer or gymnast, and my imagination took off from there and I created Synchronicity. I'm a sucker for sports romances! 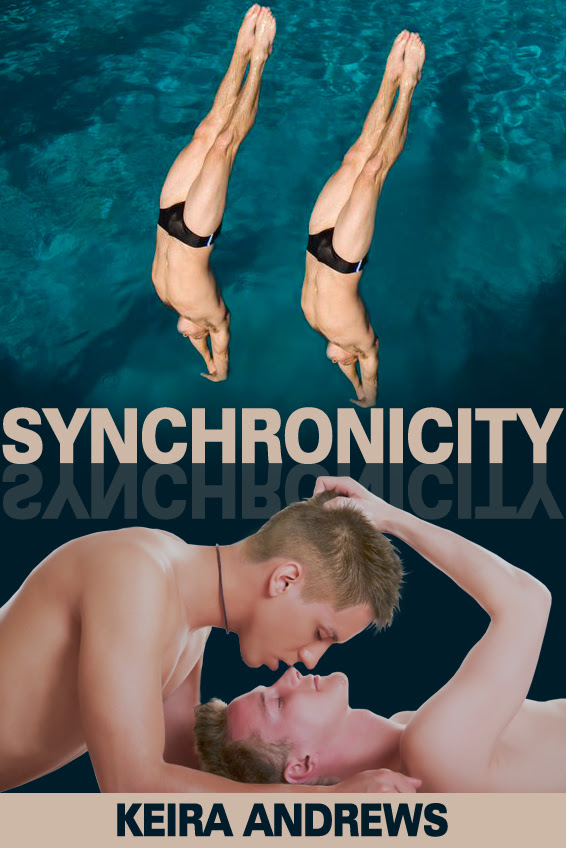 It's the opportunity of a lifetime for Tyler Bourne to compete in Olympic synchronized diving with veteran Aiden Oxford. The last thing he expects is to fall head over heels for his gorgeous partner. Friendly but distant, Aiden keeps him at arm's length, and Tyler knows his feelings are hopelessly one-sided. But as the Games begin, Tyler learns nothing is certain until the final dive.
The story is now available for everyone as a FREE download. It was a really fun story to write, and I hope you enjoy it. Thanks so much to Kate for the prompt!
Posted by Keira Andrews at 8:21 AM No comments:

Around here, June is made for parades! (Ignore those clouds, that rain, the encroaching marine layer...) From naked cyclists at the Solstice Parade to every color of the rainbow at Pride, it's a month to be outside celebrating! It's gonna be a big Pride Fest here, this year, too, methinks. What with us legalizing marriage equality and all that last November. Definitely a reason to celebrate extra hard! I admit that I'm kind of a wuss when it comes to big crowds, though, so I tend to live vicariously through my friends who go to the events and then post pics on Facebook. I'm a little lame that way.

How about you? Will you be marching/cheering/partying at your local Pride Festival?
Posted by Maia Strong at 5:58 PM No comments:

A year ago, my husband consented to allowing me to bring home two shelter kittens. I say "consented" because for years he lived with my two geriatric cats and it was not always a happy relationship. Let's just say he's a dog man.

However, I told him that kittens are MUCH different than old, grouchy, adult cats. He soon learned that I was right. This means I caught him snuggling and playing with the two little ones when he thought I wasn't looking. Today the kitties are 16 months old and I feel it's safe to say that my husband definitely enjoys them. (I won't go so far as to say he loves them, but he sure does pet them a lot.)

This brings me to one of my most favorite Tumblrs in the world......

Enjoy. Make your Sunday a little purrier.
Posted by Tory Temple at 10:12 AM No comments:

My New Adult novel, Compass Hearts, is back online! It's currently only available from amazon.com, but if you're an Amazon Prime member, apparently you can borrow it from their lending library. Of course, if you do and you decide you like it, you can still buy a copy to keep. ;-)

As the fourth son of merchant parents, Matthew Morgan has always been superfluous. The only guidance he ever received was to behave himself and stay out of the way. Now, at a new university half a world away from home, he must discover who he is and what he wants. The only trouble is, he's never made a decision in his life.

When Ash Thearon meets Matthew -- the handsome fellow student he's been ogling all quarter -- he finds him sweet, sexy, and more than a little puzzling. To solve that puzzle, he must first collect all the pieces -- something more easily said than done.

The new friends quickly become lovers, but Matthew's sheltered life has taught him only how to follow another's lead. Ash wants more than that; he wants the give and take of an equal. Matthew's tendency to try too hard to please others leaves Ash wondering how to teach him independence without losing him.


(When did New Adult become a category? I am so bad a keeping up with trends!)
Posted by Maia Strong at 12:02 PM No comments:

Landon and Daniel have been best friends since grade school. Through thick and thin, they’ve always been able to rely on each other. So it only seems natural for Landon to step in and offer assistance when Daniel has a run of bad luck.

Moving in together and splitting the bills seems like a simple solution to Daniel’s financial problems. However, sharing close quarters makes it difficult to keep less than platonic feelings on the down low.

The line between friends and lovers blurs during a late night moment of weakness fueled by alcohol, leaving both men on uneven ground. Just when they think they have things worked out and might have a shot at something more than friendship, a sudden shared windfall provokes all new complications that could end more than the new physical side of their relationship.

Posted by Amanda Young at 6:00 AM No comments:

My Day Job has been keeping me so busy I’ve hardly had a chance to think, let alone write. I did, however, carve out a small bit of time to write a post for the Hop Against Homophobia and Transphobia.

While the Day Job has been keeping me too busy to read every post or even comment on those I’ve squeezed in during this Hop, I have been thinking a lot about what we can do to support our gay and trans brothers and sisters. Sure, blog hops are a fun way to encourage support and education, it doesn’t feel like enough. Personally I default to giving to charities. Throwing money at a problem doesn’t make it go away. It helps those that can and will assist do so, yet it still doesn’t feel like it is truly enough.

I don’t have any easy answers, and I’ll continue to dwell on what else I can do until I find a solution I can be happy with. Until then, I ask each of you to not forget the posts you’ve read during this hop, and keep in your hearts and minds that friends and strangers alike need the strength of the entire world to stand against the hate of the closed-minded fools.

Love trumps hate, but only if we show it by standing up against those that would oppress us with their close-minded views. Love is louder. Be loud, cari miei.
Posted by Pia Veleno at 6:49 PM No comments: