In case you missed it when it was free, the lovely Chris at Stumbling Over Chaos is hosting a giveaway of The Argentine Seduction!
Contest closes at 7 p.m. CDT on May 30. May the odds be ever in your favour. ;)

Posted by Keira Andrews at 10:53 AM No comments:

throw my views into the fray...but. as am atheist partnered with a former Mormon turned agnostic...finally a little of us on the news: I think it's one of the reasons Joe resonates across the boards. I don't belittle people who "believe" but I don't use the books to "preach." I think that's where most "inspirational books fall down. You have to be objective about the religion, whatever form it takes.
Posted by James Buchanan at 12:06 AM No comments:

I've finalized the new cover for my re-release of Compass Hearts. Whaddaya think? 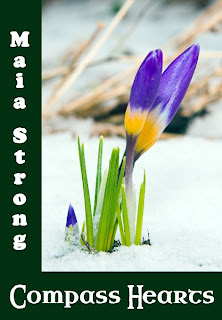 I'm super pleased with it!

My friend and critique partner is playing FLE for me on this manuscript. Making sure the small changes I made work and that I haven't missed any typos. (Serious fingers crossed there. I was not happy about the number of typos that were in there even after I, my editor, and the original FLE went over it. We're only human, but geez!)

Look for the re-release in the next week or so! In the meantime, here's an excerpt:

He barely recognized his own voice as he went on. "The human body is... fascinating." There was a question, an invitation, underlying his statement. He hoped Ash would hear it and understand. Despite this sudden swell of bravery, he knew he couldn't say that out loud.
A slow smile spread across Ash's face. Matthew grinned back, guessing his message had gotten through. His guess was confirmed when Ash asked, "Have you ever had a live model?"
"No." Matthew's cock strained at his breeches. He yearned to draw Ash, see him stripped and posed. He couldn't remember ever wanting anything so much or so urgently in his life.
Then reality crashed down on him. His face fell. "My materials are at my apartment." In the time it took to get there and back, the moment would be beyond lost. And there was no way he was taking Ash back to his flat. He didn't want Ash to see it. It was so unbearably grim, lacking in any charm or comfort, especially when compared to Ash's quirky and inviting room upstairs.
"What do you need?" Ash asked.
"Charcoal pencils, largish paper."
"I have that."
"You do?" Matthew perked up at this spark of hope. It was almost too good to believe. "How? Why?"
"Botany class. We do a lot of plant sketching. I not only have charcoal pencils, I have pressed pigment pencils."
Matthew's eyes lit up and Ash grinned and grabbed his hand. "Come on." Ash pulled him to his feet and toward the stairs.
Matthew's practical side asserted itself and, still clinging to sense, he asked, "What about our books?"
"No one will bother them. Come on!" He practically dragged Matthew from the parlor. By the time their feet hit the stairs, though, Matthew was plenty willing to follow him up.
Inside the cozy comfort of the little attic room, Ash went immediately to the window seat. He opened it and fished around inside, coming up a moment later with a large tablet and a tin box. "Here." He handed the box to Matthew who opened it and looked in wonder at the myriad colored pencils within.
"Where did you get these?" he asked, awed and envious.
"Some of them I bought in town. Some of them my dad gave me before I came here." Ash flipped through the tablet of his botany drawings, Matthew looking over his shoulder. The plants were barely recognizable, and then only because he'd labeled them. "They're awful, I know," said Ash. He pulled a disgusted face. "It's all right to say so."
"I just have one question," said Matthew.
"Yes?" Ash turned and looked up at him. "What?"
"Are you actually passing botany?"
Ash burst out laughing. "All right, Master Critical." He flipped to a blank sheet and shoved the tablet at Matthew. "Let's see you do better."
"That much I can guarantee."
"I've never been an artist's model." Ash's eyes shone deep blue in the lantern light and his voice was husky. "Tell me what to do."
Matthew swallowed hard once. The heat and tightness in his groin were intense, and he was glad for the tablet he held in front of him. What was he thinking? He'd never get through this! Panic began to rise in him, quelling his arousal. No. I want to do this, damn it! Steeling himself and taking control of his fear, he said with as much authority as he could muster, "Strip."
Posted by Maia Strong at 11:54 AM No comments:

So excited that the short story sequel to The Chimera Affair is now available!

The Argentine Seduction finds Sebastian on his first mission -- and Kyle fighting his overprotective urges. :D

FREE until tomorrow!
Until May 15, The Argentine Seduction is FREE at Loose Id! Plus, The Chimera Affair is on sale for only $4.99! Don't you love a deal? Happy reading!
Posted by Keira Andrews at 12:30 AM No comments:

Stopping in v. briefly to post before I make sure the house is extra clean for Mother's Day brunch. We finally stopped trying to do lunch at a restaurant when my two toddler nephews wouldn't sit still. I guess that means I better stop eating all the cookies I made for today.

Really, really, really looking forward to having some free time to work on a languishing novel. I told my publisher I'd have something in for our anniversary month in September, so I suppose that means I better make good. I've got about 5 weeks until vacation, so my notes are all ready and waiting.

In short, happy Mother's Day to all you amazing moms who love to read M/M fiction. I'm not a mom to a human being, but I've got a few four-legged kids at home who whine for food and treats and attention.
Posted by Tory Temple at 6:00 AM No comments:

The Best Commercial Ever. Spock (Nimoy) v. Spock (Quinto). You don't get to see Nimoy cutting up much, but this is cool
Posted by James Buchanan at 11:12 PM No comments:

Compass Hearts went out of print at the end of April and I'm in the process of re-reading it, tweaking any little things I feel like tweaking, and creating new cover art. All in preparation of re-release. Look for it back on the ebook shelves by the end of May!
Posted by Maia Strong at 6:39 PM No comments:

There's something about finishing a project that's both exciting and a little depressing. On the one hand, you have a finished manuscript that's almost ready to share with others. On the other hand, you're saying goodbye to characters you poured a little bit of yourself into and spent so much time creating. I thought I'd share a peek at the rough blurb for the new novella I just finished. I'm calling this one Windfall.

Landon and Daniel have been best friends since grade school. Through thick and thin, they’ve always been able to rely on each other. So it only seems natural for Landon to step in and offer assistance when Daniel has a run of bad luck.

Moving in together and splitting the bills seems like a simple solution to Daniel’s financial problems. However, sharing close quarters makes it difficult to keep less than platonic feelings on the down low.

The line between friends and lovers blurs during a late night moment of weakness fueled by alcohol, leaving both men on uneven ground. Just when they think they have things worked out and might have a shot at something more than friendship, a sudden, shared windfall provokes all new complications that could end more than the new physical side of their relationship.

Posted by Amanda Young at 10:04 PM No comments:

Jason Collins, NBA center, came out this week. Sure, you’ve heard this already. This isn’t going to be another celebratory post; you have plenty of those to read. Oh, don’t get me wrong, I’m happy for him, and for gay athletes everywhere. This is a big step for gay athletes in so many professional team sports today.

What blew my mind this week was the people who made variations of the comment “Why the heck is his sexuality a headline article?”

Why, in a time where we’ve already grown bored with exploring space, in a world where we can genetically engineer our food, in a world where our biggest concern is whether or not a cockapoo is a real breed, why is it a big deal that a basketball player prefers the company of other men?

I truly believe that in my lifetime, this question will disappear completely. Before I crawl into the ground and return to the goddess, I will see a time where any man or woman can be gay, bi, straight, or trans without it being a big deal.

That’s not today, but it is a tomorrow just over the horizon.

PS Hounded By Love is now out in paperback format. You can get it from Amazon now, or it should be populating on Loose Id's website very soon.

If you haven't had a chance to read Hounded  yet, here's a brief excerpt to tease you:

“You’re lonely, huh? Don’t I know that feeling.” He rubbed her back from neck to tail. When she shoved her muzzle into his hand, he scratched under her jaw. She flopped over on her side and lifted a leg, begging for a belly rub, which Reed happily provided.

Reed would normally jump if someone sneaked up behind him, but the beagle had lulled him into that content, relaxed state that only dogs could provide. He glanced over his shoulder, intent on making a friendly comment in return, but lost his voice when his gaze hit leather knee-high boots and then traveled upward over thick leather-encased thighs to an impressive leather-cupped package. Reed gulped and licked his lips. He tore his gaze off the man’s crotch and looked up into chestnut eyes lined with smudges of black.

Just like the dog. The beagle’s eyes looked lined too, thanks to her well-bred coloring. Though on the dog, they looked soulful, and on the man… Reed swallowed hard. Maybe an extroverted bad boy wouldn’t be so bad after all.

“Daisy,” the sexy hound said, nodding at the dog by means of introduction. “She’d much rather sniff out lingering evidence of everyone who’s been in this lot in the past week than greet someone actually standing before her.” He shook his head, and his dark hair flopped around his face. Reed wondered if the Mohawk was meant to be falling down like that, because if it was, it was definitely working for him. The sides weren’t shaved but trimmed short and messy. Did that define a Mohawk nowadays? Reed admitted he didn’t know, and it didn’t matter. Two thin blue streaks raced through the longest part of the Hound’s floppy hairstyle. Reed hadn’t noticed the extra-unnatural color from across the lot. He could picture all that teased black and blue hair falling around his face like a veil as the man leaned over to kiss him. If only.

Posted by Pia Veleno at 8:00 AM No comments: