Release day for A Clean Break is finally here! This is the sequel to A Forbidden Rumspringa, and thank you so much to all the folks who've been excited for this book. I mean, someone took the day off work so she could read it immediately. I just...wow. How amazing is that? I have the best readers.

Sequels are always nerve-wracking, but I hope book two will live up to expectations. I'm hard at work on book three, A Way Home, for an April release. I didn't want y'all to have to wait too long to find out how David and Isaac's journey ends. This first trilogy will be complete, but I'm already planning more books for them down the road. These boys just keep telling me stories! In the meantime, I hope you enjoy the second book in their journey.

They’ve escaped to the outside world—but can they really be free? David and Isaac have found happiness in each other’s arms. In faraway San Francisco, Isaac’s brother Aaron helps them explore confusing “English” life and move beyond the looming shadow of their Amish roots. For the first time, David and Isaac can be openly gay, yet they struggle to reconcile their sexuality with their faith. At least they don’t have to hide their relationship, which should make everything easier. Right?

But while Isaac thrives at school and makes new friends, David wrestles to come to terms with the reality of the outside world. Haunted by guilt at leaving his mother and sisters behind in Zebulon, he’s overwhelmed by the hustle and bustle of the city as he works to get his carpentry business off the ground. While David and Isaac finally sleep side by side each night, fear and insecurity could drive them miles apart.

Posted by Keira Andrews at 12:24 PM No comments:

For Eden: The Shadowfire Ring

As promised, today I'm going to share an excerpt from For Eden: The Shadowfire Ring. This is one of the short stories originally published by the now defunct Silver Publishing. It will be rereleased on Tuesday, February 3rd. Barring any upload difficulties, you'll be able to find it on ARe, B&N, Amazon, and Smashwords Tuesday morning. 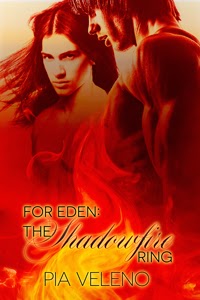 "Hello?" Bel listened, but not only didn't get an answer, he didn't hear a sound in the apartment. "Eden?" He peeked into the living room, but the silent television and empty reading chair gave no hints as to Eden's whereabouts.

He carried the pizza box to the dark kitchen and tucked it into the oven to keep it warm. When he turned, planning to take the back staircase up to the bedroom, he spotted Eden sitting in the corner behind the round kitchen table.

"Eden?" Bel's heart trembled and raced and his voice caught in his throat. The light that always called to Bel no longer shone in Eden's innocent, smooth face. "What happened?" Bel's claws lengthened, his fangs descended and, as he took a deep breath in a desperate attempt to control the fury at whoever or whatever had bred despondency in his beautiful angel, he felt piercing pain shoot through his forehead. His horns rarely sprouted, even in anger, but Eden, his love, his light, shouldn't be cloaked in shadows.

He reached for the switch. Eden's voice broke and trembled. "Don't. Please."

With a guttural growl, three candles in the center of the table flared to action. Eden flinched from their flame, tucking his chin to his chest. His wings trembled and, even in the weak light, Bel saw the ruffled feathers and, worse, those that weren't there. Eden's right wing sported a bald spot that meant at least a dozen or more feathers had been ripped out of his flesh.

Bel rushed to his side and crouched at his feet. With a comforting hand on Eden's knee and another brushing back tangled locks of hair, he did his best to keep the anger from his voice. "Who did this?"

Eden's lower lip trembled until he sucked it between his teeth. He shook his head and refused to look at Bel.

"Talk to me, my light. Let me be your strength, as you have been for me so often."

Eden turned his hand palm up and Bel gasped at the ruined flesh.

"Andaras," Bel hissed. Only his father would claim his angel with a summoning rune carved into the skin.

Eden nodded. His lip broke free from his teeth, swollen from the effort of restraining his emotions. A sob shook his thin chest and then another chased through his body. His torn wings trembled and drooped, stuck between their full beauty and a neat indiscreet place along Eden's back.

"It's too late. He's marked me and…" Fat tears fell from his eyes. "He saw the ring you gave me. I'm sorry. I took it, Bel, because I wanted to…" He took a deep breath but sobbed out the exhale. "He has it. He said you don't own me until you put it on my finger." His shimmering eyes shifted up to meet Bel's gaze at last. "I know you didn't mean it that way, Bel. That's why I had it. I was ready to wear it, but the magic didn't work."

"Because we didn’t say the words," Bel finished. "I know."

"And I foolishly refused to accept it when you tried." Eden’s voice broke and his wings trembled as his shoulders shook with a silent sob.

Bel covered both of Eden's hands with his own, touching lightly to avoid causing more pain to Eden's injuries. "I didn't mean the ring as ownership, Eden. I wanted to protect you."

"I know." Eden huffed out an exasperated exhale. "I knew then, too, but I panicked. I… fucked it up."

Bel laughed, but despite his hope of calming the angel, he heard the tension in his own voice. "Did my innocent angel just swear?"

Eden's eyes reflected anger and pain, but shadows of amusement flickered in the background. "He said if you don't return to your duties as his son, he'd come for me. Bel, it's okay. I know how much you hate what he made you do. All angels are taught to endure suffering and I will go when he calls me."

"Oh, fuck no." Eden winced at Bel's words, making the demon laugh. "You said it first." Bel sobered and shook his head. "You're not going with him. There is no way in Hell you're leaving me."

Bel stood. Eden's eyes widened. He knew the answer before he asked the question. "Where are you going?"

Eden shook his head. "No. No, don't, Bel. He'll hurt you. He'll make you return to his side." The angel shot to his feet, his ruined wings trembling. "That's if you're lucky. It's impossible for even full demons to find their way out of Hell without permission."

Pulling the angel into his arms, Bel nuzzled his warm neck. "I'll find a way."

"Shh…" Bel brushed his lips over Eden's. "I'll come back to you. Remember, you're my guiding light, Eden. I'll find my way back to you, always."

I'll post the buy links over at my blog on Tuesday. Drop on by! www.piaveleno.com

Posted by Pia Veleno at 6:10 PM No comments: