When I first told people I was writing Cold War about two gay figure skaters, many of them pictured something like Blades of Glory. Er, not quite! 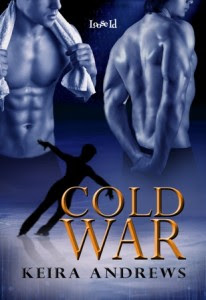 After an explosive locker room confrontation with his Russian rival ends in the most surprising and intense sex of his life, American pairs skater Dev Avira needs to refocus. He’s worked for years to win Olympic gold, and he can’t let himself—or his partner—down. Distraction in the form of steely and smoldering Mikhail Reznikov is the last thing he needs as he prepares for the biggest competition of his life.

But with the Games only days away, they can’t keep their hands off each other. Dev soon learns that beneath Mikhail’s arrogant and aloof exterior is Misha, a passionate man who warms Dev’s heart and scorches his bed. They're both determined to win, but for Misha his freedom could be on the line. Can Dev put his deepening feelings on ice as he goes for gold? 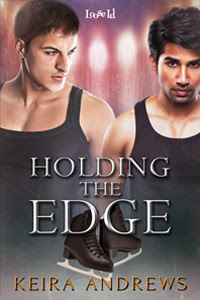 Can Misha and Dev keep their romance under wraps this holiday?

Writing this sequel from Misha's POV was really fun. I learned a lot about Russian holiday traditions (huge thanks to Tatiana, my Russian translator and answer-er of my many, many questions), which was fascinating. They go all out for New Year's and have Orthodox Christmas in January. I love learning about other cultures, and I hope you'll enjoy reading as Misha and Dev spend their first holiday together. Here's a bit more about Holding the Edge:

Misha Reznikov has an Olympic gold—and a secret lover who just happens to be the silver medalist. Now that their competitive days are over, Misha and former rival Dev Avira are setting up house in LA and giving their relationship a shot in the real world. They agree that keeping their romance strictly under wraps is best for their pro careers and Misha's family back in Russia. So what if Dev hasn't told his parents, and they never eat out for fear of being spotted? It's not perfect, but they're together.

But as they prepare for a special holiday skating show on Christmas Eve in Dev's hometown, tension builds. How long can Misha and Dev keep their love secret—and what happens if one of them wants to stop hiding?