I am so thrilled to announce the release of Secret Pleasures. This little collection of gay erotica stories is packed full of 45,000 words worth of kinky goodness. 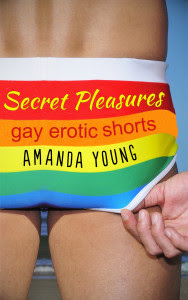 Secret Pleasures includes nine burning hot stories of lust between men. There’s a little something for everyone in this anthology, including naive virgins, scheming jocks, innocent freshmen, sexy frat boys, and seasoned daddies on the hunt for satisfaction.

The following stories are included: Tutoring Jocks, Manhandled By The Boss, Double Teamed, Study Break, Cruising, Seducing Mr. Robinson, Pool Boy Seduction, After Sunset, and Punishing The Peeper. Each story was originally released individually (some under a pseudonym) but have now been compiled for this collection.


The collection is for sale at all major retailers, including the ones linked below.