Good news! I re-released my space opera novella False Dawn this past weekend! I'm quite proud of the cover I put together. I loved the original one so much that I did my best to honour the original image. I hope you like it! 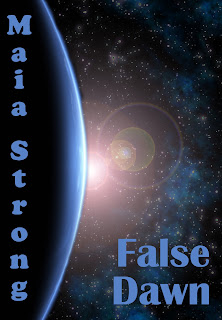 Here's an excerpt, too, and it's not the one I usually use for this book. It's a bit steamier than that. ;-)

***
"Hi!" Galen barely got the greeting out before Dayan was through the doorway and on him.

Dayan grasped him by his broad shoulders and pulled him into a searing kiss. Startled but willing, Galen opened his mouth to Dayan's searching tongue, and Dayan took full advantage. He swept his tongue along Galen's teeth and tickled the roof of Galen’s mouth, reveling in the taste and feeling, the warmth and the wetness.

When at last they came up for breath, both men were panting. Galen's brown eyes were nearly all pupil, and Dayan was more than ready to fall into them. He'd waited all damned day to show his lover just how proud he was of that promotion.

"Congratulations, Detective," he said, his voice a husky purr of desire.

"I take it you don't want to go out to celebrate." Galen's expression and tone were wry.

Dayan returned the look with a lascivious, one-sided grin. "What do you think?" He pressed his hard, aching cock against Galen's thigh, just below the hip joint, and rolled a little from one side to the other. Galen groaned and leaned in for another devouring kiss. Dayan happily obliged.

Again, they only parted when they had to stop for air. Gasping, Galen smiled broadly. Dayan loved that wide mouth, those straight, white teeth, and dove in for more before either of them properly caught their breath. His head felt light, but whether from lack of oxygen or overload of lust, he didn't know. Didn't care.

Dayan pushed against his lover until they were brought up short by the couch that stood against the outer bulkhead. Dayan released him again and gave him enough of a shove that Galen lost his balance and sat heavily. Without a pause, Dayan straddled him where he sat and began to undo the buttons on his new dress shirt--as much an indication of his new rank as the badge that glinted at Dayan from his belt.

The release of each button was followed by a kiss, a nip, a bite, of Galen's dark, smooth, muscled chest. When Dayan reached the waistband of Galen's tailored black trousers, he tugged the shirt tails up and out, found the last button, and, bent double over his lover's lap, placed a kiss over Galen's navel. He alternately circled it with the tip of his tongue, flicking at the little indentation, and sucked a mouthful of flesh around it. Galen squirmed and shook, just as Dayan knew he would.

Dayan sat up straight, one hand on the clasp of Galen's belt, the other fondling his lover's balls through the taut fabric of his slacks. The outline of his erection was hard pressed just to the left of the fly, but Dayan held off from grasping it. He's been anticipating this all day; he had to take a little revenge and make his lover wait a bit, too.

He leaned in and whispered in Galen's ear. "Is there anything you particularly want tonight?" A gentle squeeze on his sac that made Galen gasp and groan.

Galen's breath came in short gasps, and Dayan knew he had him. They'd played this game many times, and Galen had never once turned down that particular offer. He looked up into Dayan's gaze and grinned, equal parts defiance and fervor.

You can buy it now from Amazon or for your B&N Nook!