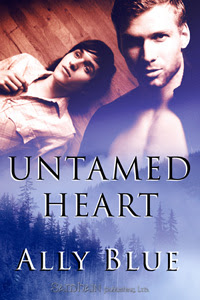 Ally's latest manlove angstfest, Untamed Heart! (Cover art by the amazing, stupendous, and entirely fabulous Anne Cain!)
Not to sound conceited or anything, but this is my personal favorite of my own books thus far. I hope everyone else loves it as much as I do :D

When Leon Fisher finds his lover butchered in their bed, he does what any good assassin would do—he gets revenge. But killing the murderer doesn’t make the pain go away. Instead, it sends him on a vicious downward spiral into alcoholism and depression.

In a bid to force Leon to sober up and regain his edge, his mysterious employers—known only as “the organization”—send him to a private property in the wilds of Alaska. In the lush and remote Tongass National Forest, Leon encounters Grim, a strange but alluring young man who saves Leon’s life after a bear attack, then brings him to a cabin in the depths of the woods to recover.

Leon doesn’t expect to fall in love with this odd, subservient person, yet he can’t deny what he comes to feel for Grim. But Grim has a past he doesn’t talk about. A past just as dark and ugly as Leon’s. And both pasts are about to catch up with them.

(Warning, this title contains the following: explicit male/male sex, graphic language, intense violence, drug and alcohol use, and references to past abusive situations.)

Click here to read a spicy XXX-cerpt, and to keep an eye out for the book's release on Tuesday!
Posted by Ally Blue at 4:57 PM

I feel like I've been waiting forever for this one to come out, Ally. It looks fabulous.

You're a doll, thank you!
**hugs**
I feel like I can't properbly enjoy my release day because I'm laid up with the stupid flu >_<