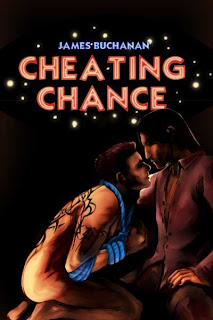 Cheating Chance
Book One of Taking the Odds
by James Buchanan
$5.95
E-Book Release: March 2008 through Torquere Press
And Coming Soon to Print through MLR Press! You’ll find it on Amazon.com and other fine book retailers.
Blurb:

Nick O'Mallley is an agent for the Nevada Gaming Commission. He's also a Goth with a hearse he's restoring, and an ex lover he's only just getting over. Brandon Carr is a cop with the Riverside PD. Lucky for him, he's in Vice where his tattoos and biker boy looks serve him well. The two meet at a Goth convention in San Diego and the sparks fly immediately. So much so that a weekend fling turns into more and Brandon spends his four day weekend visiting Nick.

Things aren't all sparks and roses though: the two do live a four hour drive apart, and Brandon's not out. Add to that a murder right in front of them, a company trying to cheat the system and the Mexican Mafia, and Brandon and Nick's relationship will need to overcome a whole slew of obstacles in order to work.

Despite everything, can Brandon and Nick make a go of it? Taken a chance on these two and find out.

Nick let out the breath he didn’t know he’d been holding. “Nope. Wasn’t. I’ll let you have a second chance though.” Opening the door to the patio Nick drew a cig out of the pack, “Ahh, the smell of Goth in the evening… cloves.”

“Need a light?” Brandon looked up and smiled again. Man, he had a nice smile.

Nick nodded. “Yeah, if ya got one.” He stepped out onto the little patio savoring the cool air off the ocean. Two lawn chairs and a cocktail table graced the small space. San Diego was nice; Nick had always liked it. This hotel was nice. Each room had its own little private patio with half a wall capped by a rail forming the balcony. The ones towards the front were open to the parking lot. This one looked over the small beach and out onto the marina.

Brandon fished a lighter off the clutter on the desk and tossed it through the door. “Sure, here ya go. Can I have a drag?”

“Didn’t bring any skirts... oh you mean the smoke...” As Brandon walked through carrying two drinks, he traded one for the cig and took a swallow. It was stronger than the ones at the club.

Brandon took a puff and blew a smoke ring. “I have only one skirt, actually a kilt, but I prefer chaps.” He dropped into one of the chairs.

“But do you wear it like a Scotsman?” Nick shot the comment into the night as he took a seat as well. “Chaps are cool... you ride?”

“I like to be ridden.” Nick almost choked on his drink. Brandon laughed and handed the clove back. “Oh, you mean bikes, right? Yeah I have a Harley-74. How ‘bout you?”

“A crappy rice burner and a fix up hearse.” Nick was relaxing into the teasing. It had been a while since he teased like this. “Once I get through all the rust there may be a car under it. Bikes are rather sexy though. Guys who ride bikes are rather sexy.”

“Even guys who ride rice rockets.”

A lot of Harley riders didn’t believe that the Japanese had ever actually made a motorcycle. Nick’s tone was a little apologetic. “Hey, it gets me around, saves on gas, doesn’t take up space in the garage.”

“How’s that drink? Need anything else?” As dark as it was outside, Nick couldn’t tell if Brandon was smiling, but he bet Brandon was. “Let me have another hit off your cig.”

One of Nick’s boots was up on the table, the other knee was slung out to the side. Offering up the cig, Nick held it level with his bent knee so that Brandon would have to come in for it. “I could use another drink.”

“You’re not just blowing smoke now are you?” Instead of just reaching, Brandon leaned forward and took a drag as Nick held it. He blew the smoke along the line of Nick’s leg. It swirled near his crotch before dissipating. “Drink number two coming up; rum and coke again?” Rising and walking back into the room towards the mini bar, the biker took off his shirt and tossed it on a chair. “It is getting a little hot in here."

“It’s the leather.” Nick leaned over to look through the door. His pulse was keeping time to the industrial beat. Watching Brandon’s half dressed form move about in the dim light was intoxicating. Tats crawled from his arms across his back, lines weaving in and under each other in a dizzying labyrinth of ink. “It makes you sweat.” He could smell the leather from out on the patio. It blended nicely with the breeze and the cloves and the rum.

“Yeah, that and other things.” Brandon leaned his trim frame against the door jamb. He obviously worked out, but not to an extreme; enough definition to be model sexy. “Here’s your drink.” He held it out and shook it so that the ice rattled.

Nick grinned in response as he took the offered drink. “Course velvet ain’t much better.” As he took the last drag on the clove, he added. “Want another?

“In my shirt pocket.”

Brandon bent down to grab the pack from Nick’s pocket. “Is this it?” He fumbled around a bit stroking Nick’s chest through his shirt.

“I thought that was a little hard.” Brandon laughed as well as he pulled a smoke from the pack with his teeth. Leaning over, he chain lit it from the dying ember still in Nick’s mouth.

Damn the boy’s eyes were so blue. Nick could think of a thousand things he could do with that mouth if a cigarette wasn’t in it. Instead he flicked his butt over the rail and sucked on an ice cube, “Still hot?”

As Brandon took a deep pull off the clove cig, he moved in close. “Always.” His hands were braced on the arms of the chair as he leaned over. The nearness of him made Nick tremble. Taking the cig out of his mouth, he blew the smoke in between Nick’s parted lips. “Adds new meaning to the term second-hand smoke, doesn’t it?” Brandon teased and moved in closer. “Want anything else?” One hand ventured down to caress Nick’s thigh.

Oh God, did he want something else. He couldn’t breathe waiting for Brandon’s lips to touch his. Nick’s tongue was still cold from the ice as he slipped it inside Brandon’s hot mouth. He could taste the cloves and the rum.

Brandon’s hand slid up his leg, stopping briefly to toy with Nick’s hard bulge. Desire was thrumming through his veins. Exploring fingers worked his shirt from under the cincher. They danced with his nerves. Fumbling with the buttons and trying to shuck the jacket and shirt without breaking contact, Nick whispered against sensuous lips, “You… out of those jeans. The chaps can stay.” He was being silly. It was what happened when he got drunk.

“Anything you want.” Brandon stood and unbuckled the chaps. One leg went up on the table. Then he slowly slid the zipper open down the inner thigh of each leg. The sucking sound of leather coming off too hot a body gave Nick chills. Smiling down on Nick, Brandon started to unbutton the fly of his jeans and slide them off his hips.

“Crap, out here on the balcony?” Nick hissed.

“Sure, why not?” As the chaps slid from Brandon’s legs, he flipped his head towards the marina. “Who’s going to care -- seagulls?” Fingers hooked through both his jeans and briefs, and inch by inch, Brandon revealed himself. His wicked smile darted over his lips the entire time. Brandon was enjoying putting on the show.

Damn, Brandon’s dick was hard. Of course, so was Nick’s own at this point. Oh man, the guy’s cock was beautiful, thick and shaved. “True.” That one word throbbed with Nick’s desire. Brandon toed out of his boots and stepped out of his pants. Kicking them to the side, he grabbed the chaps and stepped back into his boots. “What are you doing?”

Laughing, Brandon fastened the leather about his legs. “You said you wanted me to leave the chaps on, didn’t you?”

Nick swallowed and nodded. Oh, Christ, talk about fantasies. Brandon leaned over him again, kissing his chest, sucking on his nipples, fumbling with the fly on Nick’s jeans. The claw of the metal as the teeth gave way echoed in the pit of Nick’s stomach. “Is this what you want?”

“Oh, hell, yeah!” Nick could barely breathe he wanted it so much. “That and everything else.” His own fingers found the back zippers on his boots, yanking them off as fast as he could manage. As Brandon’s mouth worked at lighting fires under his skin, he struggled to get his trousers down. Fuck, why had he worn something so tight? Another pair of hands joined in the effort, peeling the fabric from his legs.

Brandon knelt down before him. “Commando?” he teased, “that makes things convenient.” Trembling, Nick watched as Brandon took his cock in one strong hand and ran his tongue along the tip. The touch bubbled Nick’s skin. “I like the way you taste.” Brandon’s tongue traveled down Nick’s length. Then he licked Nick’s shaved sac. Nick wasn’t as bare as Brandon, but he kept it all pretty clean. It made everything so much more sensitive. That strong hand was stroking his cock as Brandon pulled his balls into the hot mouth and began to suck.

“God, yeah,” Nick groaned. “Suck on me.” Brandon’s tongue flicked across his balls and traveled about the area just underneath them. Nick was enjoying the ride. He liked having someone go down him. His last partner hadn’t been especially giving. And God, doing it out on the patio where anyone might see them, it was thrilling.

“Tell me what you want.” It took a moment for Brandon’s words to register.

The thought of that blue eyed boy pounding him made Nick shiver. “What do you think I want?” A hard, hot cock stroking his insides… Nick’s blood pulsed with need. His skin tingled at the thought of it. “Oh shit, my wallet is in my pants.

Brandon paused. “What the hell do you need that for?”

Nick laughed. “No glove no love, baby.” He might have been three sheets to the wind, but he wasn’t suicidal.