I have Slash on the Brain 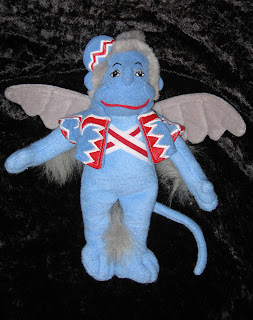 Case in point: You know you've got it when your first thought upon seeing a stuffed toy monkey is that it is gay. Honestly, look at this monkey and tell me I'm wrong.

My friend got this little fellow in her box at work. Bear in mind she works in a toy store so there's nothing unusual in that. She brought him to dance rehearsal last Tuesday and showed him off because, let's face it, he's a pretty quirky monkey. That disgruntled expression. That vest with a cape like a sailor suit. The inexplicable fur on his inner thighs. So I looked at this little guy and promptly announced, "This is the gayest monkey I have ever seen!" And proceeded to create an identity and backstory for him. His name is Garth. His boyfriend is named Ashley. The reason for the look of disgruntlement? Ashley's sick and therefore cannot accompany Garth to the Flying Monkey Ball. I do hope that Ashley is better soon so that they can attend Gay Bingo next week.

That is a serious case of Slash on the Brain.
Posted by Maia Strong at 3:30 PM

That is one strange looking monkey. :)

Isn't he? I can't imagine what a small child would make of him. lol