Spin Out is available 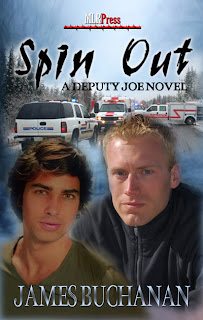 Spin Out
a Deputy Joe Novel

The sequel to Hard Fall is out.  Right now it's available through MLR Press Direct in eBook.  I'll post links for Amazon and other distributors as they go live.

Deputy Joe Peterson understood the risks when he got involved with ex-con Kabe Varghese. He didn't, however, see fit to warn Kabe. Now, in the middle of searching for the killer of a local boy, he has to contend with his career and his relationship spinning out of control. Solving the case may be easier than repairing broken trust.


Ain't nothing like the mountain air first thing in the morning. As I swung out of my new department issue Explorer, I could almost taste the first touch of snow on my tongue. Wouldn't be long before winter hit. That meant skiing, Christmas and snuggling up next to my Kabe's fine body under a layer of quilts. Not that I needed much excuse to do that. Three, sometimes four, nights a week he spent over at my place...and boy didn't the gossips like to pass that bit around.

No sense ruining my day thinking on that.

I headed on into the oldest dinner in Panguitch, nodding as I walked into the cafÃ© and getting a round of grunts and, "Hi, Joe." in return . A few other folks I said howdy to even though I knew I'd get nothing but glares back. Didn't mean I still shouldn't be polite. Slid into my usual booth in the back corner so's I could watch everyone coming and going. I didn't bother to order nothing. Jane, at the front counter, just always seemed to know what I was in the mood for and brought it on out to me.

A knot of men clustered around the big table, all of them with heads down and trading low whispers. If'n I didn't know every last one of them and what they were up to, I'da been suspicious. But they all either made their living off the big hunts or liked to pretend they did. Hunting season meant stingy strategy sessions rivaling those of warring nations. Everyone trying to figure what each other knew about where the game was and each trying not to let spill what he'd figured already.

After a few bites into my pancakes, I caught Carl Haley standing up out of the group of hunting guides and wannabes. He stretched. He hemmed and hawed a bit about going. Then he pulled out a few bills, tossed them on the table and...

I actually dropped my fork. Slipped right out of my hand. I think the big table, well, all them just froze in place halfway through whatever they was at. See, 'cause all that play outta Carl, at this time in September, usually prefaced him sauntering on back, sliding into the opposite side of the booth and grinning out, "So, seen any deer lately, deputy?"

Going on five seasons of that-me being something of an informant of sorts. Came with my job and being up and around long before the butt crack of dawn driving my patrol route along the highways and roads in a county that didn't have hardly one person for every square mile of land.


Elk, deer, moose; saw 'em all the time, everywhere. And I kept it in my head and gave it off to Carl from about start of fall on through hunting season. For that, I always had a little bit of something in my freezer , and if I got a permit in the local lottery then Carl would take me out.

I cain't say how it even hit me right then. My mind just kept backfiring on how he'd pretty publicly snubbed not only me, but a decent professional association. And Carl wasn't even a member of the Latter Day Saints, just a cowboy, one who apparently let his prejudices rule his wallet. Sorta set me down into this whirlpool of really black thoughts. Most times something like this happened-you know after everything hit the fan about me liking guys and shacking up with an ex-con pretty boy and getting excommunicated-I managed to just stick it in my pocket. But there's those you expect it from , and then those that hit you blindside.

Carl caught me off guard.

As I'm all wrapped up in that, staring at a plate of pancakes that are getting less appetizing by the moment, I heard somebody's butt slide into the booth. "Morning, Joe." Rough voice, paved like country road asphalt and varnished with years of smoke-Randy Small. I looked up. He saluted me with his coffee mug. "Mind if I join you?"
"Sure you want to?" Yeah, I was right ready to dive into a little pity party.

"If Carl's going to let his uptight ass keep him from good info..." With a roll of his eyes, Randy let the rest of that thought slide on by. He took a few swigs of his coffee. Me, I just tried to remember how to breathe again. Finally, Randy grunted, "Your flapjacks are getting cold."

I pushed them away. "Not all the hungry right now." The whole thing soured my stomach even if Carl didn't say nothing. Didn't have to. I'd have had to be dead to not hear that unspoken disgust loud and clear.

Randy chewed on my words for a moment, his mouth almost working with the thoughts, then he grunted again. "Don't let it ride you too much, Joe. Not everyone is as limped dicked as that son-of-a-bitch." He grinned and leaned in. "The moment we all realized that Carl weren't headed over here...well I thought we'd have ourselves a good old fashioned brawl right here over coffee to see who could get over here first."

"What," I grumbled, not at him but at the whole darn mess, "you stared 'em all down?"

"Naw, I just stood up and walked on over." The laugh that started ended up as a hoarse wheeze. Once he'd caught his breath, Randy finished, "Lazy dogs don't get fed."

I almost managed a smile at that. "Guess not." Eased the hurt a little knowing that not all of them felt like Carl.
Randy grinned back. "So, seen any deer lately, deputy?"

Yeah! I have been waiting for this one. I now have it in my kindle and will be reading it this weekend.