Oh, how exciting, Keira and I share a release date with Loose Id! Valerie did a great job on the cover art for The Chimera Affair, and that title definitely has my interest. Congrats, Keira!

My newest release, Hounded By Love, is also set to come out on May 15th. Enjoy an excerpt below the April Martinez cover art. 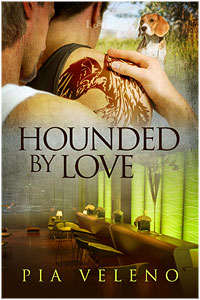 Thanks, Pia! Love your cover, too, and I can't wait to read the book. I'm v.v. intrigued by the excerpt!