We have a release date...

We finally got a confirmed release date from our publisher for the final book in the Never Too Early series! Mark your calendars for....

It's the day before American Thanksgiving, so don't tell me you have nothing to be thankful for. ;) Although it seems far off, it's only 45 days out. Chris and I are really, really pumped for this last book and we truly hope that readers enjoy the direction we took the story. I'll leave you with a small snippet, and if you haven't picked up the first two books yet, you can get a 25% rebate on them later this week from All Romance eBooks! They're having a great sale on Torquere books from October 15-31. 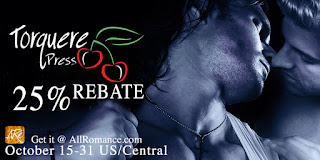 I'll leave you with this little tidbit. Happy Sunday, slashers!


The playful joking continued all the way back to Tucker's truck, much to his delight. It was more challenging to spar with three others instead of one, and not for the first time, Tucker wished wistfully that Jake and Tor didn't live thousands of miles away. It was clear that Chance needed the quiet grounding Jake gave him, and although it pinged a tiny bit of concern, Tucker would much rather know that Chance was getting something he might have been missing.

They finished lunch and sat on the blanket for a while, just chatting. Tor and Chance had a mutual love for music and baseball, it turned out, so Tucker and Jake had a serious conversation about horses and the raising of them.

The sun was low over the ocean and the air had chilled by the time the four of them gathered up their belongings and piled back into Tucker's truck. He slid behind the wheel and smiled as Tor sprawled in the front seat next to him, looking as natural as if he'd been doing it for years. A glance in the rearview mirror showed Jake and Chance leaning against each other, fingers tangled.

Tucker felt warm and contented as he drove. The little niggling feelings of jealousy were normal, he thought. He'd get used to seeing Chance so cozy with someone else, right? Besides, he and Tor were pretty cozy themselves, and it couldn't be easy for Chance to watch that. On the other hand, Jake and Tor seemed pretty comfortable with it.

Yup, Tucker thought as they headed for home, it was definitely time to figure out what was going on.