What do you get when you take:

You get Were the World Mine from SPEAK Productions. This delightful film is playing in my town for a week and I'm so glad I saw it before it flitted away. It stars Tanner Cohen as the Timothy, the openly gay hero secretly in love with the captain of the high school rugby team, Jonathon (Nathaniel David Becker). When the new English teacher casts a production of A Midsummer Night's Dream at the all-boys academy, the line between fantasy and reality begins to blur. Cast as Puck, Timothy sees a way to make his dream of love come true. But "Love in idleness" gets in more eyes than just Jonathon's and suddenly fantasy and reality are intermingled and free will is no longer in play.

There are so many things to recommend in this flick. The lyrics for the songs are taken from Shakespeare's script. Several moments in reality are homages to the story told in Midsummer... The cinematography is beautiful. The costumes and make-up are fantastic. The cast is uniformly strong. If this movie shows up at one of your local theatres, do yourself a favor and go see it.

Here are some pics to entice you. 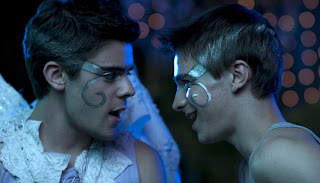 Fantasy? Reality? What's the difference?
And while I'm recommending movies, there's one I want to see but haven't had a chance to yet. I'm hoping it will come back to town for a limited engagement. It's called Humpday and apparently it's gotten a lot of buzz at festivals like Sundance and has been picked up by Magnolia. This quote by writer/director/producer Lynn Shelton gives you an idea what it's about.

"Straight guys can be funny fellows. Don't get me wrong, I love 'em to death, but the way they seem capable of turning any situation into a game of one-upmanship–even with their closest buddies–can be a pretty awesome spectacle. Humpday takes this syndrome of hetero guy competitiveness to a new, ironic extreme: two straight friends outduding each other by attempting to do each other."

Whenever I get to see it--even if it's only on DVD and not the big screen--I'll let you know.

Has anyone seen either of these? If so, I'd love to hear what you thought of them!
Posted by Maia Strong at 1:19 PM

I've been DYING to see this for weeks! Never have I been grumpier about living in a small town!

This = Were the World Mine. *headdesk*

Humpday sounds like good fun, too. Can't wait to see both of them!

I HATE living someplace these movies will never show up. Thank heavens for Netflix! Because if the local Blockbuster carries either of those, I'll eat my laptop.

Also, I'm going to assume you've seen Latter Days, Beautiful Thing, and the classic Maurice, right? Of course you have. I think I've been through Netflix's entire list of lgbt movies, including the foreign ones. I liked that French one, You'll Get Over It, but there was a German one about boys training for a crew competition, that I liked even more.

I'm lucky to live in a large city where we get a good variety of flicks, even if some are only in limited release.

Laurie, I'll try to post when I see that either/both have been released to DVD. Everyone should see Were the World Mine!

Louisa, I have Latter Days and Maurice, but I don't know Beautiful Thing or You'll Get Over it. I'm putting them on my "to rent" list now! My fave vid place is really good about getting the small release and indy flicks. Thanks for the tip!

I think I missed it. I checked today and it was here in Nov. for the gay film festival. Shoot. I'm going to keep an eye out because it sounds fun and its rated PG I think (it was here) so I could take my daughter.

Maia, Beautiful Thing is especially wonderful. A whole great cast of characters, not just the two boys, who are utterly believable and sweet.

Tam, good luck! I hope it comes back to your local theatres so you and your daughter can go.

Louisa, I love a well-rounded cast of characters. Definitely going to look for this one. Hmm...maybe I can borrow it. Someone I know must have it, right? ::crossing fingers::