The Dark Horse After Dark 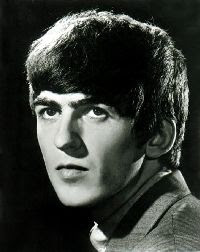 It all started with a young man named George, this desire to write M/M. Years ago, as I struggled to write something original, I would work on my skills through writing fan fiction. While not a Trekker or X-Phile, I did hold a fascination for the shows, preferring to cross them with other fandoms. Eventually I incorporated my love of Quantum Leap into this psuedo-genre, since it made for easier crossing of the streams. In my brief fanfic career as "majhoulihan," I had Sam Beckett leaping into the 4077th, into Central Perk, and into the sound booth at KACL radio.

And then one day, for reasons still unclear, I put Dr. Beckett into the body of a pre-fame Liverpudlian. The original intent of the story was to use George to keep the band together (and to get him to quit smoking, natch), but as I shaped the story the attraction to pair him with another of the lads grew strong. By the final draft it was Sam's mission to prevent another of the Beatles from offing himself over unrequited love for the Quiet One. That story (which, sadly, has dissolved into the mists of Internet oblivion) was posted on a public fanfic forum, and from there came an invitation to join a private list for Beatlefic writers.

Oh, you should have seen the place. Brokeback Mersey. Every pairing of the Fabs you could imagine - John/Paul, Paul/George, John/George, George/Ringo, John/Stu Sutcliffe, and so forth. Oddly enough, though, I rarely saw such fiction featuring Brian Epstein, which would have made sense.

It was a comfortable place to be. I wrote short pieces of different heat levels, and participating in round robin stories. I received great feedback on my work, and as I wrote I worked to transfer the fan fiction to real fiction. Writing George in this way helped shape Brady Garriston, my hero in Truth or Dare, who seduces a young male desk clerk in his apartment building early in the story. To some extent there is still influence, as the majority of my characters are musicians.

Mind you, I don't believe the real George was homosexual, and I couldn't tell you what he would think of young female fans imaging him in these compromising positions. Considering his association with Monty Python, I'd like to think he'd have gotten a kick out of it, but as writer's block doesn't come around as much anymore I doubt I'll revisit the Fabs in this manner again. There are plenty of stories to write for characters yet to be, all of whom surfaced in my consciousness, led by the music of a brilliant musician lost to us too soon.
Posted by Leigh Ellwood at 9:00 PM