Wishing on a Wednesday

Wishing I had more time to read, that is. I recently received editor acceptance from Cleis Press for a guy-on-guy construction worker story and have been perusing their website to see what all they offer. They've got quite a few anthos and I'm a sucker for short stories, so I hope to check these out soon. 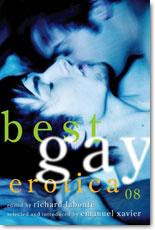 This one is coming in December and sounds very promising...

Rough and surly, smooth and sultry, or quick and raw — however you like it, you’ll find it in Best Gay Erotica 2008, twenty of the hottest and best-written man-to-man sex stories to appear in print this year. In "Underground Operator" two men on a nearly empty subway platform indulge in rough, anonymous sex that lets them momentarily forget the stifling summer heat. "Donuts to Demons" finds a self-described "rock-n-roll artfag" searching for a lover "as patient and gifted and generous as he advertised on craigslist." 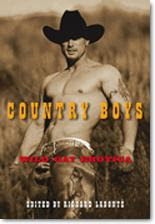 Wild Gay Erotica? Even the title makes me want to break out my spurs...

Country boys are a special breed. Something about that wild terrain brings out the best — and the sexiest — in a man. These tobacco-chewin', cattle-ropin' icons in temptingly baggy overalls or skin-tight wranglers rank with cops and soldiers as the most potent symbols of the naturally masculine male. Sweating and sensual from honest, hard work (and play), they come in all shapes, sizes, and erotic potential. City homos hike the wilds to commune with nature and nature boys. Gay pioneers enjoy rural living and loving. Lonesome queers meet for moonlight trysts in the cornfields. Whether yielding to the rugged charms of that hunky ranger during bear season or skipping the farmer's daughter in favor of his accommodating son, the men of Country Boys: Wild Gay Erotica unabashedly explore sizzling sex far from the city lights. 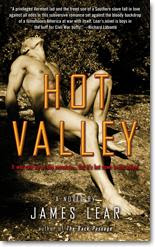 This one's a novel, and a historical at that.

Move over, Scarlett O’Hara! It’s New England, 1861, and the troubles in the southern states seem a long way off for Jack Edgerton, the spoiled son of a prominent Vermont family. However, when he meets and falls in love with Aaron Johnson, the sexy son of a slave on the run from Virginia, Edgerton’s world is turned upside down. Separated by circumstances, the lovers pursue each other through the escalating madness of the Civil War and both find themselves forced to choose sides. After a series of outrageous adventures — including steamy woodland trysts and an impromptu jailhouse orgy that briefly reconciles the warring parties — they are reunited in the Shenandoah Valley in the autumn of 1864 — where the conflict is about to come to a bloody, burning climax.

Have a great humpday!
Posted by Laura Bacchi at 6:52 AM

i just bought a book called : call me by your name by andre aciman. its the next book on my list to read, it sounds good.

Congrats on your acceptance Laura. You'll have to keep us informed of when the book your story is in will come out.

Let us know how it is, anon. Cover looks intriguing :)