A sneak peek of Reckless Seduction 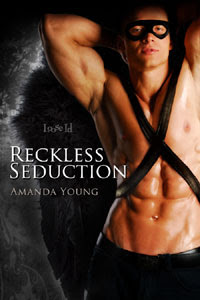 Blurb:
When nineteen year old Cody Bradbury gets his hands on an invitation to the hottest party of the year at The Casbah, an exclusive gay men’s club owned by his uncle, he doesn’t plan to let anything stand in his way of attending. With a stolen invitation, fake identification, and a hastily thrown together costume, Cody sneaks into the club during its annual Halloween party with the intention of checking out the action and possibly losing his long-despised cherry.

Cody can’t believe his good luck when Dante Santiago comes on to him. He’s had a hard-on for his uncle’s friend, Dante ever since he realized what his dick was good for. He’s so enamored of the older man that he doesn’t think twice when Dante starts referring to him as pretty boy, instead of by his given name.

He knows Dante wants his body, but is there any chance the older man might want more than an orgasm? There’s only one way to find out, and Cody plans to make it a night neither of them will ever forget.
An Excerpt from Amanda Young’s Reckless Seduction
© Amanda Young, 2008 All Rights Reserved

Luck was with Cody as he entered the club. There was a new guy on duty at the door who didn’t look twice at his fake ID or ask him to remove the black latex Zorro mask that stretched across his eyes and tied at the back of his head.
With mixed emotions -- excitement and trepidation both high on the list -- Cody strode through a well-lit foyer and handed off the trench coat he’d worn over his outfit to a smokin’ hot coat-check clerk. The man sported a head full of ebony dreadlocks and wore nothing but a tiny tiger-print loincloth across his lean hips. He whistled while he looked Cody up and down. “Very nice.”
“Thank you,” Cody said, preening a little as he accepted his coat ticket and walked on by. He knew he looked good in the black latex bootie shorts and matching vest, but it was always nice to have it confirmed by someone else. He loved the shining silver zipper that ran down the front of his shorts, allowing him easy access to his package if he felt the need to get naughty in a hurry. The soft leather vest hugged his chest like a second layer of skin and was held closed by three silver snaps. The black patent leather boots he’d purchased that morning were a nice touch; the platform soles gave him two extra inches of height while the upper portion laced up the front and clung to his calves. The boots stopped just short of his knees and left plenty of skin on display. The overall effect left him feeling half-naked and loving it.
It seemed like all eyes were on him as he entered the main room. Men were packed into the club like sardines, walls of naked flesh as far as the eye could see. Pulsing techno music poured from invisible speakers, overwhelming Cody’s sense of hearing.
There was so much to look at that Cody didn’t know what to concentrate on first. People were all around him, a sea of face paint and leather. There were young men, old men, and every age in between strutting their wares for all to see. Some of the costumes were outlandish -- yellow, feathered chicken outfits and one sad purple grape. Men dressed in drag, with sequined dresses and fancy wigs. Others were more intriguing, like the leather daddies and their boys. While there were some men decked out to the nines in tuxedos, others chose to bare as much skin as possible without being naked. One such man leered at Cody as he walked by, the dingy jockstrap obviously well worn.
Cody rolled his eyes, not even tempted to follow someone with such questionable hygiene, and turned his attention to the club itself. Instead of the garish orange and black one would expect to find in honor of the holiday, the club was decorated in black and white. Male go-go dancers shook their stuff atop white pillars strategically set around the room, their costumes little more than black jockstraps and boots. White curtains draped the outside of black leather booths on either side of the huge dance floor. A double staircase at opposite ends of the room led to the second floor, which was pitch-black and evidently off limits, judging from the white rope blocking the entrances. From rumor alone, Cody knew that was where the real action went down. People whispered of erotic acts that dissolved into orgies of epic proportions.
As he stood gaping at the scenery, Cody spotted a man dressed as a dark angel at the back of the room. Revolving white light spilled from the DJ’s booth and backlit his heavy musculature and a wild plumage of ebony wings. A mask, much like Cody’s own, hid the upper half of the man’s face, making his aquiline nose and full lips more prominent. The black leather harness that crisscrossed his wide chest and leather pants left little to the imagination and sent Cody’s blood racing south.
Christ, that guy is hot. He stared, his heart pounding. His dick, trapped at an uncomfortable angle, throbbed against the inner lining of his latex shorts.
Cody couldn’t wait to meet men and throw himself out into social scene. The club practically pulsed with life and vitality, and he wanted a little of that to rub off on him. Maybe he’d walk away with some new friends, or even a potential boyfriend or two.
He bounced, excited for the festivities to begin. Tonight was going to be the best night of his life. He just knew it.


Available in October at Loose Id
Posted by Amanda Young at 1:27 AM