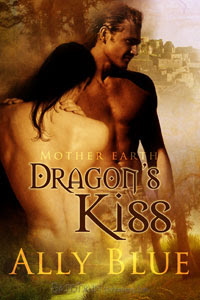 Coming Friday, June 5th from Samhain Publishing. This is a short story, first in a new series I'm planning. I've never really done futuristic before so it should be fun :)

In a future ruled by superstition and fear, wanting the wrong man can be deadly.

The rules governing a Pack-Brother’s existence are simple. Love your Brothers. Protect each other and your Tribe with your life. Seek sex only within the bonds of Brotherhood, or your life is forfeit. The laws are harsh, but fair. Or so Bear has always thought. Then he and his Brother Lynx capture a stranger in the Carwin Tribe’s outlying lands—Dragon, a Brother from a distant Pack, banished from his Tribe for the crime of challenging things he shouldn’t.

Dragon intrigues Bear from the start, and not just because of his exotic beauty. Interest in the decadent old world is discouraged in this post-Change society. Dragon is the first person Bear’s ever known, other than himself, who’s curious about the vanished past. That kinship sparks a forbidden attraction between them. An attraction which is, if they give in to it, punishable by death.

In the space of a day, everything Bear was raised to believe is called into question, and he must make a life-changing decision—follow the law, or follow his heart.

Bear pulled out more cured meat and tossed it to Lynx. “Who’s got first watch?”

“Me. You had last watch before we got started this morning, so you need the rest more.” Lynx tore off a hunk of meat with his teeth, chewed, and swallowed. “We’ll leave at first light. That way we’ll make it home well before dark.”

Dragon’s gaze flitted between them. In the firelight, his eyes were a pale, almost silvery gray. “I heard Carwin Tribe lives inside Char. That true?”

It didn’t surprise Bear that Dragon had heard of the ruined city which surrounded Carwin’s walls on all sides. By all accounts, Char was the place where the old civilization had made its last stand after the Change. They’d done their best to keep the old ways alive—evil, wicked ways, according to everything Bear had learned growing up—and keep the Mother’s punishment at bay. It hadn’t done any good in the end. Less than fifty years after the oceans first began to rise and the human race realized the enormity of its sins against the Earth Mother, Char had fallen into the same chaos that had already destroyed the rest of civilization.

All that remained of Char now was a sprawl of crumbling ruins and a large collection of machines and other artifacts which no one fully understood. Dangerous predators prowled Char’s streets, which made traveling between Carwin’s walled central city and the outlying tribal lands risky. At least it discouraged the nightfeeders and occasional bands of murderous outcasts from approaching Carwin City.

“Carwin’s just inside Char,” Bear confirmed. “It was a ruin before the tribe settled there and fixed it up.”

Dragon’s head tilted sideways. He shot a glance at Lynx, who was poking at the fire, then pinned Bear with a curious look. “So they didn’t build it? It was already there?”

This was Bear’s favorite story, and he couldn’t see any harm in telling it. After all, it wasn’t a story of the old world, was it? Tales of Carwin’s settlement were allowed. Resting his elbows on his knees, he adopted the tone he half-remembered his mother using when he was a small child, before the tribe’s Seer spotted him as Pack and took him from his home.

“When the founders of the Carwin Tribe were traveling through Char looking for a place to settle,” he began, “they came to an old road, the kind people used before the Change. On the other side of the road was a huge, wide field, and in the middle of the field was a city inside a wall.”

“Carwin.” Dragon’s eyes were wide, his voice no more than a breath.

Encouraged, Bear nodded. “This city was like nothing they had ever seen. Strange shapes rose up over the walls, like the skeletons of mountains. One shape pointed straight to the sky like a needle. The people were scared, of course, but the walls of the city were tall and thick, and inside were enough buildings to shelter ten times the people they had. And even then, the Carwin Pack was strong enough to defeat any enemy within or without the walls.”

Startled, Bear shook his head. “Buildings. Nightfeeders. Wild dogs, cats, other animals. Those weird metal skeletons, whatever they were. They’re still there, actually. They’re rusted, parts of them have fallen off, but they’re mostly still there. There used to be little carts on them. Some of the carts are still inside ruined buildings at the base of the skeletons.”

Bear chewed his bottom lip, torn. He’d seen the things the council and the tribe elders called photographs, some of them more than fifteen generations old. The first tribe members had encased them in a tough, transparent, flexible substance to preserve them for all time. The photographs depicted a world beyond imagination. A world where giant metal birds filled the sky and magic boxes could show a person things that were happening so far away it would take weeks to walk there. According to Mother Rose, the Carwin Tribe’s founders had discovered the photographs in a pile of books, papers and clothes alongside four huddled corpses inside one of Carwin’s many buildings.

The problem was, Bear wasn’t supposed to know that. He’d overheard it at a council meeting when he was nine and he, Rabbit and Lynx had snuck into the council room and hidden in the wine cabinet. So he couldn’t very well tell Dragon, in spite of the oath he’d taken as a Pack-Brother to be truthful. He doubted that oath applied to situations like this anyway.

“No,” he said after a long silence. “They didn’t find anything else.”

With a sigh, Dragon slumped where he sat. He picked crusted leaves off his knee. “I bet they did. Your Mother and your council just don’t say so, because they don’t want you to know. But they know something about it.”

Shocked, Bear stared into the flames. He didn’t dare look at Lynx for fear his expression would give him away. He often wished he could go back in time, just for a day, to glimpse a life that had vanished forever when the Earth Mother took back what was Hers.

He knew better than to express that desire. Lynx had never understood Bear’s fascination with tales of the world before the change. A Pack-Brother shouldn’t walk around with his head in the clouds, he always said whenever Bear broached the subject. But nothing could stop Bear from dreaming of that lost world sometimes, when the nights were hot and restless.

Glancing at Dragon, Bear saw a faraway look in the man’s eyes. A look Bear knew he himself wore when he was daydreaming about the distant past. As if he could feel Bear looking at him, Dragon blinked and met his gaze. Bear smiled. Dragon smiled back, and Bear felt a jolt go through him. He looked away, heart racing. He didn’t want to feel this drawn to a man he couldn’t have. Especially a man who might be a murderer, or worse.

“I’m gonna get some sleep.” Bear stretched out on his back, keeping Dragon’s rope looped around his wrist. “Dragon, you might as well get some rest too.”

“You want me to take the rope?” Lynx asked, moving to a position where he could see into the darkness outside while still keeping an eye on Dragon.

“No. I’ll wake up if he moves.” Bear yawned and shut his eyes, trying to ignore Dragon’s tantalizing nearness. “Don’t forget to wake me up for my watch, Lynx. Just because you can stay up a whole day and night doesn’t mean it’s a good idea.”

Lynx laughed. “Shut up and go to sleep, Bear.”

Bear smiled. Just before he drifted off to sleep, he felt the rope move as Dragon shifted. His fingers tightened, making sure Dragon stayed close.

Watch the Dragon's Kiss page on my website and the Samhain homepage for the buy link to go live on Friday!
Posted by Ally Blue at 10:14 PM