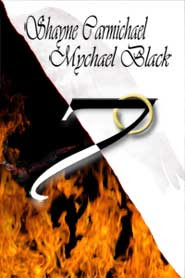 So, I have TWO new releases--both anthologies. :D

First up is 7--with myself and Shayne Carmichael. It's available in ebook and print from Torquere Press.

When one thinks of the Seven Heavenly Virtues, hope, charity, faith, temperance, prudence, justice, and fortitude, and the Seven Deadly Sins, greed, sloth, anger, lust, gluttony, envy and pride, lessons in life come to mind. In 7, each Virtue and Sin is presented as a theme for a story, each one is explored, whether positive or negative, literal or figurative.

With a variety settings and styles, from courtesans on another planet to vampires of the Romanorum, from demons lusting after ghosts and a cat and dog chase of epic proportions, there's bound to be something for everyone. This fourteen-story collection comes from Mychael Black and Shayne Carmichael, the authors of The Prince's Angel and The Two Shall Become One. 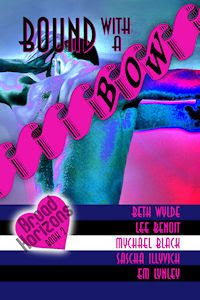 Latex, leather, or lace. Oh, my! Bridles, bondage, and ball-gags. Oh, wow! Puppies and ponies and paddles. Yes, please. May we have some more?

It’s almost Christmas time and everyone is headed to Broad Horizons to celebrate the holidays. You won’t find a jolly fat man in a red suit here, unless that’s what turns you on of course, but you will find everything else your lusty libido desires. Got a naughty sub that needs some special discipline or just feel like checking out the club? Maybe you’d like to buy a membership for that special Domme in your life? If so, then Broad Horizons is the place to be this Christmas Eve. We don’t care if you’ve been good or bad. In fact, we think naughty is nicer, and we know it’s a hell of a lot more fun.

Pretty Tied Up by Beth Wylde: The holidays are here and Dani and Maryanne are back in action at Broad Horizons. Maryanne has offered herself up to her partner, in her first live bondage exhibition, as Dani's Christmas present. When practice doesn't go quite as planned Dani is worried she may have to cancel the show, especially as a last minute equipment problem pops up. Can Dani's sudden brainstorm save the show and eliminate her need to go shopping too? With her woodworking skills, and a few favors people owe her, she might just have Christmas, and Maryanne, pretty tied up.

Completion by Mychael Black: By day, Eli Knight works for Kent Evans’ computer graphics firm. By night, however, he serves an entirely different role: that of Evans’ submissive. The love and respect between them is deep, but Kent knows Eli holds a candle for Mitchell Phelps, Eli’s best friend. When Kent takes Eli to a Christmas party at the BDSM club Broad Horizons, Eli has no idea what to expect from his trangendered Dom. What he discovers -- about them and himself -- is more than he could ever hope for. Now it’s up to the both of them to find out if their love is strong enough to handle a major addition.

Lessons Learned by Sascha Illyvich: After being left at Broad Horizons by an angry master, Wendi meets Summer, an experienced Domme with a surprise. Will Summer's challenge to Wendi help her capture the heart of her beloved Master?

New Tricks by EM Lynley: Skeptical and straight-laced Blake isn't so sure about attending Broad Horizons' Christmas Eve Party. He's never gone in for any of that kink, but he wants to humor Jay as they spend their first Christmas together. Despite his initial aversion, he's powerfully drawn to the scene and eager to experiment. After Jay reveals a hidden secret from his past, he's willing to play, and in the end Jay receives a gift more precious than he ever expected.
Posted by Liz at 10:31 PM