Who's Stirring Up More Trouble?

I am! I just got the cover art from MLR Press for All Stirred Up, the second half of the stirring stories. The first book, Stirring Up Trouble, featured Toby and Evan, Chefs who manage to cook up the perfect recipe for love. 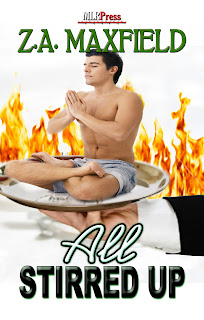 The second book features Evan's twin brother Brendan as he reels from PTSD, only to find the proposed cure -- in the form of psychiatrist Dr. Dirk Melovitch, MD and a stay in an upscale rehab center -- might be worse than the disease.
Here's a little snippet for the curious!
After Keith opened the door to his lush private office and Evan frog-marched him inside, Brendan had only a second to wink at Debbie, Keith’s administrative assistant, before Keith closed the door and the three were alone.
“Fuck almighty, you two look like Dorian Grey and his picture.” Keith motioned for them to sit and rounded his desk. “I’ll cut to the chase, seeing as we all want what’s best for you, Brendan, and the company.” He fumbled around, neatening an already pristine stack of papers. “We’d like you to take some time off. We have a place in mind that will provide you with the help you need—”
“And who is it that says I need help?”
Keith ignored him. “And we’ve retained the services of a specialist in the field—you can think of him as your id’s personal trainer—to help you get a handle on coping with your PTSD and the behaviors related to that. A failure to comply will be met with vigorous unpleasantness.”
“I beg your pardon?”
“Failure to comply—”
“I heard what you said, what the hell does that mean, vigorous unpleasantness?” Brendan glanced at his twin, who looked equally blank.
“What that means is you’ll be removed as CEO, and the board of directors will float you gently to earth in a golden parachute tied to a non-voting emeritus chair. What that means is you will effectively lose control of a corporation you and your brother built from the ground up.”
“You can’t do that. Not without Evan on board.”
Evan shook his head. “Of course he can’t under normal circumstances, and for the record he does not have me on board. But if they’re united and they prove you’re unfit to vote, they can make serious trouble. This is a sucktastic economy, and everyone’s paranoid about the bottom line. You can’t afford to take them all on.”
“I don’t want to go, damn it. Shouldn’t I be allowed to choose whether I go to rehab or not?”
Keith’s words were harsh. “Not this time, no. You aren’t using your head. You need this. Just do everyone a favor and take care of this before it eats you alive.”
Evan stood there, staring him down.“He’s right.”
“Et tu, you big weenie?” Brendan shoved his hands in his pockets. “I’m just supposed to take one for the team?”
“Jeez, Bren.” Evan sighed. “You took one for the team when you saved our mother’s life. Now take care of yourself. Nobody here thinks less of you. I’d be a wreck if I’d been through something like that—”
Brendan sat in one of the chairs and put his head in his hands. Was Keith’s office always so fucking bright? “Can we please just not talk about it?”
“If you’ll agree to go…” Keith’s voice trailed off but still held the threat of severance.
“I’ll go, if only it will get you off my back.”
“You won’t regret this, Bren.” Evan sounded so relieved.
“I already regret this. When and where?”
“Debbie has your itinerary. We’ve gone to a great deal of trouble to see that it’s painless. Your specialist will meet you tomorrowto take you through the whole procedure, flights, car rentals, check-in at the facility. All private, all first class.”
“Like an episode of Intervention only without the time-delay, so I can personally tell you what a bullshit, asshat, motherfucking—”
Evan gripped him by his shoulders, “Shut up, Bren.”
Brendan dissolved into tears again, damn it. “Shit.” He whispered so only Evan could hear him. “I’m not keeping it together too well, am I? I’m a mess.”
“It’s all right.” Evan rubbed a circle in the space between his brother’s shoulder blades with the heel of his hand. “It’s going to be okay. You’ll see.”
“I don’t even fucking use, Evan, you know that. A couple of drinks at night. You know that, right?” Rehab. Now he’d have to bear the label, like he was Amy Winehouse.
“I know. What you have is something else, okay? It’s not your fault, but that doesn’t mean you can let it go untreated. It’s not getting better. You’re not going to get better without help.”
Brendan nodded.
“Promise me you’ll at least give it a try?”
“I promise.” He laughed weakly and pushed away. He stood straighter and put his hands in his pockets. “A few weeks vacation on the company dime? Hell yes. Fire up the margaritas and bring on the shrinks. I don’t suppose you’re sending me to the Virgin Islands? I could use some virgins.”
Keith frowned and looked away.
“Gallows humor, Keith, I’ll get my itinerary from Debbie and go home to pack.”
“Your flight leaves at 9:30 in the morning.”
“I think I’ll stay at the Benjamin tonight and let the maid service scour my loft. They haven’t been there for a while, and things have gotten out of control.”
“Do you want to meet your doctor before you go?”
“Hell no.” Brendan wanted to sweep regally from the room, but his mother was the queen of exit lines—not him. “Have him pick me up at the hotel at six a.m. Tell him I’ll be in the lobby wearing a tinfoil hat.”
“Fine.” Keith’s dismissal was just what Evan needed to usher Brendan from the room.
“As for you, Ev, the least you could do is buy me lunch in that ridiculous pumpkin restaurant of yours.”
Posted by Z.A. Maxfield at 11:06 AM

I hope he likes his doctor a lot!

Woot! Congrats on the cover, ZAM! Looking forward to this book!

Do you know when this will be available? I've been a good girl, I've been patient. Sort of.

Nix, well it doesn't start out that way but when does it ever?

Thanks Cherie and Lex, I am so happy to see this one come out, it's pretty exciting.

Hi Kel, this will be out before May!

Thanks Karenna, glad you liked it!