I ‘m excited to have a new release today and as usual I have the jitters that come with a book being published. It is an exhilarating yet scary feeling when a new book comes out. *blowing out a breath then grinning* Don’t get me wrong I love release day and look forward to it…but I just feel nervous in a good way.

Anyway Opposing Rhythms (Impressions - #3) is now available at Total E Bound here. Niall and Roarke welcome to the world. (grin) Here is the blurb for the book. 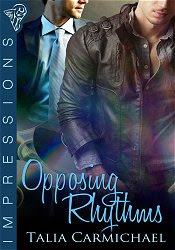 When a man who makes interesting objects from the CD’s of a musician he cannot abide the rhythm for meets him - the sparks are going to fly.

Niall Hilton cringes whenever he hears music from a group that used to be his favorite until after their second album. In his opinion Roarke McBride - the bands lead singer and songwriter – is to blame for the loss of rhythm that had made the band great. When a friend brings the singer into his home Niall is irritated by the intrusion and lets Roarke know his opinion on his music. The singer surprises him with a performance of his latest hits, which to Niall’s shock he actually enjoys. He’s stumped as to why. Although Niall plans not to see Roarke again the musician is determined to change his mind. As he gets to know him Niall is drawn beyond the persona of Roarke the superstar to the man – who is interesting and aggravating.

Roarke McBride is used to some people not enjoying his music and is usually able to shrug it off. Niall’s creations from his CD’s make him laugh thinking it’s a trick until Niall opens his mouth and insults him. Instead of taking it in stride as his norm Roarke is furious, at first. By the next day his thoughts are clear - Niall might hate his music but Roarke is determined to make the stunning man his. Niall was snarky, rude and blunt but as he gets to know him Roarke sees he would stand by his side and weather anything with him. In order for Niall and he to meld they will need to combine their…Opposing Rhythms.

Buy here from Total-E-Bound / Read excerpt
Posted by Talia Carmichael at 6:55 AM

I've just bought this and can't wait to start reading it.

I read Resonate last week and loved it. Really looking forward to the next one.