I'm excited to share my new cover art and the very rough blurb of my June release, Secrets and Lies, with you all. Croco Designs did a fabulous job with the cover. :) 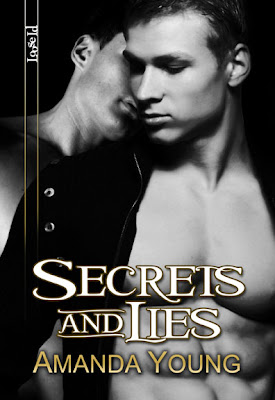 Blurb
After the near genocide of his race, Teague Johnson now spends his life hiding in plain sight. In a city of populated by humans and nightfeeders alike, he and his brother are forced to cloak themselves in forged histories in order to blend in among the hierarchy of society.

When he’s not working at Oasis, the sex club he and his brother own, Teague keeps to himself. He relies on strangers to feed his sexual desires, but anything more intimate is off limits. A nosy boyfriend snooping around in his business is the last thing he needs.

Kyle Drake’s arrival at the club makes Teague rethink his favorable stance on one night stands. From the very first touch, Teague can’t get enough of Kyle. Their weekly trysts give Teague a reason to anticipate the future — until Kyle unexpectedly disappears.

A visit from an old friend thrusts Teague’s life under a microscope and endangers everything he holds dear. Allegiances are tested, and the lines of friendship blur in a race to stop an inhuman killer. Kyle’s fate hinges on Teague’s ability to untangle the intricate web of secrets and lies before it’s too late.
Posted by Amanda Young at 2:44 AM