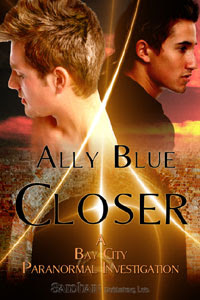 After nine months of tumult, Sam Raintree is ready for some peace and quiet. A beach vacation with his boss and lover, Dr. Bo Broussard, promises to provide the serenity and reconnection they both need. Bo’s business and his children command a good deal of his time, and Sam is looking forward to two weeks of his lover’s undivided attention.

Then a new case for the Bay City Paranormal Investigations team puts a crimp in Sam’s plans. Fort Medina, a seventeenth-century citadel guarding the mouth of Mobile Bay, is less than five miles from their vacation beach house. Bo invites the group to stay with them while investigating the place, promising Sam he won’t get involved. But Sam knows better. Sure enough, Bo can’t resist joining the investigation, and talks Sam into doing the same.

Events take an alarming turn as Bo’s behavior becomes more erratic each day. Puzzled and frightened, Sam scrambles for an explanation while the man he loves turns into a volatile and unpredictable stranger.

When the truth comes out, it may already be too late to save Bo from a force neither of them can control.

Two hours later, clean, dressed and sated—temporarily, at least—Sam and Bo sat side by side on the rattan love seat on the upstairs porch, watching a thunderstorm roll in across the water. Over the Gulf of Mexico, the sky loomed black and ominous. The sun still shining on the inland side lent a weird green glow to the rippling water and turned the sand blinding white.

As the first scattered raindrops clinked on the blue metal roof of the house, a bolt of lightning cut a brilliant zigzag between the clouds and the water. A moment later, thunder rumbled across the sky. The sun was blotted out as the storm rushed in and the rain began in earnest.

“I love this porch,” Sam declared, not for the first time. The house had deep covered porches running all the way around both levels. The second story had proven to be the perfect spot from which to watch the brief but violent storms that buffeted the beach most afternoons. Sam had been captivated from the first by the fiercely beautiful spectacle. “I love the sound of the rain on the roof.”

“I am relaxing. But you know how busy we’ve been lately. I’m just worried about my team, that’s all.”

Winding Bo’s braid around his hand, Sam gave a gentle tug, forcing Bo’s head back so Sam could look him in the eye. “Stop worrying. I’m sure they’re fine.”

Bo bit his lip in that unconsciously sexy way which always made Sam’s insides twist. “I’m sure you’re right. But maybe I should check on them, just to make sure.”

Sam was already shaking his head before Bo finished speaking. “No, you shouldn’t. Andre’s in charge, and you know as well as I do that he’s perfectly capable of handling whatever comes up. Plus Danny’s full time now, which means everybody else is free to concentrate on the active investigations.”

Bo nodded, the furrows smoothing from his brow. He’d hired Danica “call me Danny” McClellan as a receptionist-slash-secretary after the Sunset Lodge case touched off a barrage of new cases. A fifty-one-year-old widow with a grown daughter, Danny had over twenty years of secretarial experience under her belt. Since she’d joined the group, the office had become more organized and well run than it had ever been. Between her and Andre, Sam had no doubt the rest of the crew would be fine in his and Bo’s absence.

Smiling, Bo slid a hand around the back of Sam’s head and brought their mouths together. They shared a languid kiss as the thunder boomed and the rain pelted the roof. When they broke apart, Bo rose to his feet.

“I’m just going to call real quick,” he said, leaning down to peck Sam on the nose. “I’ll be right back.”

Before Sam could argue, Bo had the sliding glass door open and was already inside. Sighing, Sam stood and followed him into the enormous master bedroom.

Bo was sitting on the side of the king-sized bed, dialing the phone. Sam wandered over and sat beside him as he pressed the handset to his ear.

Bo ignored him, but Sam saw the gooseflesh pebbling Bo’s arms. He grinned.

“Hi, Danny,” Bo said into the phone. “It’s Bo… Yes, we’re having a wonderful time, thank you for asking. Is Andre there?… Okay, thanks.” He elbowed Sam, who was tracing a single finger up and down his spine. “Stop that.”

“Oh, am I distracting you from the work you’re not supposed to be doing?” Dipping his finger below the waistband of Bo’s indecently tiny cut-offs, Sam caressed the top of Bo’s crease with a feather-light touch. “Oops.”

Bo glared and opened his mouth, no doubt to reprimand Sam, then snapped it shut again. Sam heard Andre’s deep voice faintly through the mouthpiece of the phone.

Stop that! he mouthed, pushing on Sam’s chest. His pupils were dilated and a pink flush colored his cheeks. Grinning, Sam shook his head, ducked under Bo’s arm and caught one brown nipple between his teeth. Bo squeaked.

“No, I’m okay,” Bo said in answer to whatever Andre had asked. “Sam doesn’t think I ought to be calling y’all, so he’s being a pain in the ass.”

Letting go of Bo’s nipple, Sam sat up. “I was a pain in the ass earlier, in the shower,” he called loudly enough for Andre to hear. “Right now I’m being a pain in the nipple, to punish him for working on vacation.”

Masculine laughter drifted from the mouthpiece. Groaning, Bo covered his eyes with his free hand. “Ignore him, Andre. I’m not working, just checking in.” He dropped his hand from his face and aimed a halfhearted kick at Sam’s ankle. “So how’s everything going? Y’all doing okay?”

Bo fell silent, listening. He leaned back on one hand, legs falling open. Judging by the intent expression on Bo’s face, Sam figured whatever Andre was saying must be pretty interesting. Sam, however, couldn’t care less. All he cared about right then was the denim-clad V between Bo’s thighs.

Sliding to the floor, Sam knelt between Bo’s legs, bent forward and rubbed his cheek against Bo’s crotch. Bo’s scent, clean and musky and deliciously male, made his head spin.

“Fuck,” Bo hissed as Sam’s tongue traced the swell of his cock through the shorts. “No, Andre, not that… The case sounds interesting. What are the details?… Oh no, I swear I won’t interrupt our vacation with work. Sam would kill me.”

Damn right. Staring up into Bo’s glazed eyes, Sam undid the battered shorts and pulled out Bo’s hardening prick. He licked at the head, tearing a harsh gasp from Bo’s throat.

Bo’s hips lifted in silent invitation. Not one to waste an opportunity, Sam worked the shorts down Bo’s legs and pulled them off. Bo flopped onto his back, legs bending up and spreading, the phone still pressed to his ear.

“Uh. Yeah. S-so you’re starting—Jesus, Sam—you’re starting the day after tomorrow?… Uh-huh… Well, then why don’t you—” Bo broke off, letting out a sharp cry when Sam stopped sucking his balls and bit one firm butt cheek hard.

Sam indulged in a moment of smug satisfaction before taking Bo’s now-full-blown erection into his mouth. He shut his eyes and let Bo’s taste and smell and the feel of his skin fill his senses.

Through the rush of his lust-quickened pulse in his ears, Sam thought he heard come on out and plenty of room and a not-quite-coherent promise not to do something or other before the phone bounced off the carpet and Bo’s fingers tangled in his hair.

A thread of suspicion wormed through the haze of desire fogging Sam’s brain. He ignored it. Whatever Bo had just agreed to, he’d find out—and they’d probably argue about it—later. Right now, he wanted to wring as much pleasure as possible from this one perfect moment.

Something told him it might be his last chance for a while.
Posted by Ally Blue at 2:09 PM