Anne and I are thrilled to be part of the talented group here at Slash and Burn and while we definitely write plenty of hot man sex, our work is heavily influenced by the Yaoi genre and the talented gorgeous men of Japanese rock. In recent months we've been told that using Asians and Asian Americans as lead characters presents too much of a cultural barrier to breech.

To this we say simply WTF?!?

Our super publishers, reviewers and readers don't have a problem connecting with the universal human emotions we tap into when writing so we were totally dumbfounded (though not really surprised) to find that the more mainstream publishing folk weren't as enthusiastic.

To that we say Pffffttt.

Clearly these sticks in the mud don't know what they're missing. Is this not a Hot Man??? 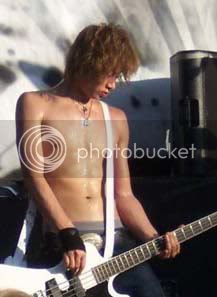 fans self Of course it is.


And his band mates are equally hot. In their younger more visual days they were very hot together posing in all those suggestive "fanservice" ways both onstage and off.


AND (here's the best part) Anne and I have been "up close and personal" with two of them. Yes, it was very briefly but we have gazed into the gorgeous eyes of Ryuhei & Jun, we have seen Kiyoshi's shy smile. 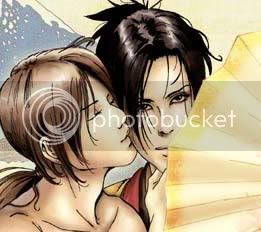 We will gladly continue to stroll through our little slice of fangirl heaven and let our imaginations and countless mental images take us where they lead.

Just don't anyone let Kyo know that he's the inspiration behind Gobei the icky little flesheater.


With their music topping the charts worldwide, the band mates of Japanese rock band ChildsPrey have everything they’ve ever wanted---international success, millions of fans, money, fame. But for guitarists Jun Doi and Koji Takasoto, the nights this winter are long and empty.

Since the band's early wild days full of passionate sex and hard music, Koji has seen Jun as more than a mere friend. Worried that admitting his feelings would jeopardize this relationship and their success, Koji keeps his long-standing love a secret. Meanwhile, Jun's hopes for happiness in the New Year crumble. Following the break up of his marriage and an injury to his hand that could put his career on hold, he needs Koji’s friendship more than ever before.

Whisking his friend away for the holiday, Koji puts everything on the line. Both men have had their share of hurt and loneliness, but if Koji can find the courage to say what's in his heart, can they find the love they've been longing for?

The chemistry between Koji and Jun in Winter Song had me continuously turning the page to see what would happen next. The two men are incredible friends and their characters are so well developed that I really sensed the depths of their friendship.


Till next week (when we have a surprise)…Rock on!
Posted by Barbara Sheridan at 11:21 AM

I like your books, I have 2 of them but they are on my home computer and I am at my temp. job. So I could not tell you which ones that they are.

(I'm not usually one for blogs, but I'm really loving this one...)

Anyway, I love it that you use Asians in your work. *g*

I'm American, but not Caucasian (I'm 'mixed'), so I love it when other races are represented.

I have already read the books and they are awesome! I especially loved all the art work in Soul of the Night@@@!!!! Who ever win will in for a very enjoyable read!!!!!

I must say that I agree with your original statement reply to the cultural barrier to breech with a
WTF?!? and Pffffttt... too.

Your boys are steaming hot and two are always better than one!

Did you know the paperback version wil have the art too. Not in color due to printing costs but still Ryuhei & Kiyoshi in b&w will be just as hot ^_^

Thank you! We've heard again and again how Asian lead characters didn't seem "marketable". That's obviously not true because there are writers doing well with Asian theme--Laura Jo Rowland anyone?

What I think they meant (but for whatever reason didn't say) was "it not marketable because you aren't Asian as well". That's still rather foolish IMHO since Anne and I place much emphasis on the emotional aspect of our characters. Love and loneliness and happiness are universal feelings no matter your cultural upbringing.

Thank you!. We hope you enjoy the books. Please let us know. ^_^

From Shayla: "I'm American, but not Caucasian (I'm 'mixed'), so I love it when other races are represented."

Exactly! America is full of so much diversity--why shouldn't stories reflect that? :D Publishers like LooseId are great for books with interracial couples.

This sounds like a great book and I'm all for celebrating diversity.

cool a contest! I don't really have much to say except the grave yard shift sucks!

I feel your pain. I worked that shift for a few years. Hated every minute of it. I never could get more than 3-4 hours sleep during the day so it was not pleasant.

Thank you for stopping by & commenting!

I think erotica provides the valuable service of escapism but also encourages an "open mind" not only in regards to sexuality and creativity but in terms of a world view. I truly believe that generally, people operate on a foundation which has been built by the popular media. When you say "Asian men" people think of Jackie Chan, Jet Li, Chow Yun Fat and now Ken Watanabe. Not to say that those men are unattractive (Jet Li is very adorable and Ken has a good body) when people confine themselves to certain popular images they become nothing but slaves to what people "tell them" to see and appreciate. Don't let the corporations introduce you to new wonderful specimens of male flesh. I would like to mention that many AMERICANS of Asian heritage find that their acting and modelling careers take off in their parents homeland than in the good ole USA! The use of multi-ethnic men and women in stories will help decrease racism and help people realize that our world now lacks borders. Political and social internationalism is a reality and it should enter the world of fiction. Although Barbara gave an excerpt from the Child's Prey universe I wanted to bring up her and Anne's recent release SOUL OF THE NIGHT which is about a group of Japanese actors in Chinatown(http://www.dragonsdisciple.com)which takes place in our own backyard--19th century SAn Francisco, a city which offers such a rich and lively background! Barb and Anne offer hot stories written with a deep appreciation of the culture and humanity these fictional character represent.

I haven't as yet read your work. New fan of ebooks using Loose ID, and just saw this website, and contest and thought I'd post. I have read the excerpt, and it's on my must-get-list. (yes, I'm one of those keeping lists!) I think I've purchased and enjoyed about 4-5 of the authors linked on this site! too cool. Everyone keep up the great work...I feel like I'm so behind and have so much reading to do to keep up!!!!

Hi!! You both know I am a huge fan and I am thrilled at all of your success!! I hope that you will do very well with all of your future endeavors!!

BTW I just finished reading both Orange Moon and Winter Song!! I waited to read both of them until I got Orange Moon, so that I could read them in the appropriate order!!

Once again thank you for writing such wonderful books and boy is that a sexy guitar player!! Sexy as Toru!! *smooches*

I tend to write about Chinese men, but aside from a few shorter pieces that I've sold, I've encountered the same 'issues' as you and so I haven't bothered subbing any of my Chinese slash novels anywhere yet - apart from to China!

As you know, the market for BL is huge in Asia and that's where most of my stuff goes now LOL. I find it amusing that Western publishers find it a problem that I'm a Caucasian writing about Asians, and yet this is not considered a problem when I write for the Asian market... and if anyone had the right to complain, it'd be them!

Also meant to say that I really enjoyed Soul of the Night, and Anne's line drawings are ethereally lovely. I do prefer Chinese men over Japanese but good slash is good slash, regardless of race ;)

Olivia--I find it amusing that Western publishers find it a problem that I'm a Caucasian writing about Asians, and yet this is not considered a problem when I write for the Asian market... and if anyone had the right to complain, it'd be them!

And that my friend says it all. The US e-publishers don't have a problem it's the big stogy boys in NY with the issues. I suppose they don't think it will make enough $$$ to justify the risk.

Thank you for the comments on SotN. Wait till you see the manga Anne is doing for Blood Brothers. Our Liu is half Chinese. ^_^

From Stacey: "Boy is that a sexy guitar player!! Sexy as Toru!! *smooches* Thanks for stopping by, Stacey!!! *GLOMPS*

Olivia -- I had no idea you were another kung fu fan also! And Amen to this, sistah: good slash is good slash, regardless of race ;)!

Still can't wait for Revenant's release day. :D Darn May 8th for being so far away...*sigh*

LOL Anne I love my kung fu movies! And while you and Barbara have your hot J-Pop guys, I'm more than happy with the likes of Andy Lau...

And yep, I am champing at the bit about Revenant!

Andy is teh hawtness.

Have you seen Confession of Pain? Tony Leung Chiu Wai & Takeshi Kaneshiro.... nifty little plot with many twists. And they even put in a funny yaoi type reference in the beginning.

Once again thank you for writing such wonderful books and boy is that a sexy guitar player!! Sexy as Toru!! *smooches*

Do you mean the pic that's in this blog?

If so, he's a bass player. Though it's hard for me to tell if it really is Totchi. The pic's kinda blurry.

I lean more towards Kyo and Die, myself, in terms of sexiness. Totchi's teeth kinda detract from that. But then, of course, there are Kyo's teeth, also, but I don't know, I kinda like them.