Okay, I know my last blog post here was about the same subject, but this Luke/Noah storyline on As the World Turns has eaten my poor wee brain. I'm completely mesmerized by this tale of young love. Like any other soap couple (more on that in a minute), they're going to have to weather the storms of homicidal fathers and life-threatening injuries that require serious yet completely unspecific surgeries. (Hey, it doesn't matter what they're operating on -- all we need to know is that it's bad!)

So, are Luke and Noah really going to be treated like any other couple by the writers? So far they have been, for the most part, but two edited scenes are raising eyebrows amongst "Nuke" fans. Aside from another kiss that was apparently filmed and not used, the couple's second kiss was really about five seconds longer than the version that aired. Unedited version is here. (Let me just rewatch it a few times for purely...scientific reasons. Yes, scientific.)

There are rumours that show owner Procter and Gamble is unhappy with the storyline, but considering it's giving ATWT more new viewers and buzz than any other storyline is, you'd think P&G would be thrilled. I suppose time will tell. I'll leave you with this adorable picture of the two actors, Van Hansis and Jake Silbermann. 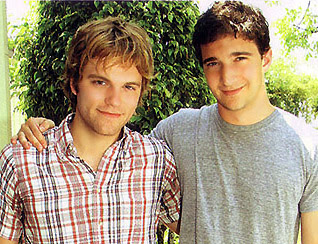 Posted by Keira Andrews at 6:16 PM

OMG! They are so cute!

Yep, and incredibly HOT too!

You're both very welcome! They're the perfect combo of adorable and HOT.

Ohhh, girl....this Nuke obsession is catchy. *hearts in a big way* Have you joined the wiki yet? Your fanfic would be a-w-e-s-o-m-e here: http://lukeandnoah.wetpaint.com/

(I reposted the comment because I got the link messed up the first time :-P)