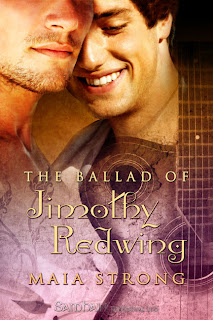 Sorry not to continue the round-robin again (esp. after that last, smokin' round that Zoe posted), but...

The Ballad of Jimothy Redwing is IN PRINT TODAY! Woo-hoo!

Wand’ring Minstrel Jimothy Redwing is used to life on the road, living by the words and music that are his stock in trade. While he’s comfortable finding his way alone, he’s always amenable to a friendly stranger who knows the lay of the land. Ricky Lennox is smart, funny, handsome, and very amenable.

With a place to stay, a sexy new lover, and some local contacts, Jimothy looks forward to delivering the letters in his care—including a message for the local ruler—and earning a little money with his music before moving on.

Ricky’s declaration he’s interested in more than just a one-night tryst starts Jimothy thinking about settling into a life of perfect harmony. But things hit a sour note when he learns his lover’s true identity—and exactly what’s in the epistle to Kanbec’s ruler.

Jimothy’s journey turns out to be far more complicated than he could have dreamed, and as dangerous as any epic ballad. For himself—and for Ricky.

And as if that weren't enough, I sold another manuscript! Whee! Same universe. Same country. Same genre. Different publisher. I don't have a release date or anything as definite as that yet. I just sent the contract back last week and I'm trying to be patient. (I suck at patient.) But I had to share my good news and... a blurb!

On the surface, Jonas Vaneau's life is ordinary. He works at the law courts during the day, spends Sabbath night with his parents and every other night with his cat, and tolerates the unending string of single women his mother invites to Sabbath dinner. But his routine life cannot provide what he most desires—at least not as long as he must continue to pretend to be the person his overbearing parents want him to be.

An unusual encounter with a seemingly ordinary brothel client causes Micah Hartshorn considerable consternation. When Jonas inexplicably breezes past his emotional defenses, Micah finds himself involved in a drama that is far beyond anything for which his professional skills have prepared him. Solving this new puzzle isn't in his plans—especially not when he has his own issues to deal with both at home and at work.

All personal problems are swept up in political unrest when new laws threaten both men's livelihoods. When even greater troubles send Jonas's world spinning beyond his control, it's up to Micah to save him from his downward spiral—if he can.

What future can Jonas and Micah hope to find together in a city turned against them?