Release and Round Robin 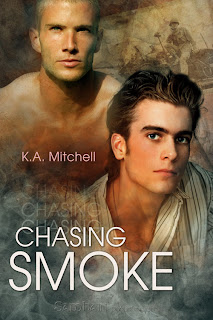 Chasing Smoke is now available! You can buy it here or wherever you like to get your ebooks. If you need tempting I offer you a sexy excerpt and a free prequel. Joan (the m/m reviewer at Dear Author) was kind enough to make Chasing Smoke a recommended read for June.

Okay. So I owe some round robin-ness.

He rose from the table and went to find Cole.

Cole stood in front of the window in his bedroom. Matthew knew Cole had to have heard him, but he didn’t turn around. Not even when Matthew spoke.

Cole still didn’t move. “I’m always happy to hear that. What about?”

“I—”I’m scared. Matthew tried again. “Look, it’s hard to know who to trust, okay? Things are pretty fucked up right now. I’m sorry that I pissed you off. You really have been a nice guy.”

“I didn’t ask you to apologize. Or for a compliment.”

“I know.” Matthew really had blown it this time. The one person who actually gave a damn—at least for a few hours, anyway—and Matthew had made the guy so mad he wouldn’t even look at him. He took a breath and let it out, hands fists in his jean pockets. Should he just go? Back out into the rain with no money and bruised ribs and—

Cole turned to look at him. The guy really was cute. A little short, but still strong. Matthew’s palms itched to feel Cole’s biceps shift under his grip. He wanted….they didn’t even have to fuck. It would be nice just to have someone like Cole next to him, someone warm, someone who gave a shit if Matthew was there in the morning.

He couldn’t figure out how to ask for it, though, couldn’t see how they could end up like he wanted, wrapped around each other in that big bed if they didn’t get there fucking. And he wasn’t going to offer that again until he was sure Cole would take him up on it.

“So does the fact that you’re still standing there mean you’re staying?” Cole came toward him.

“Yeah. If that’s still all right.”

Cole smiled, stepping closer. Matthew took his hands out of his pockets. Maybe this could go the way he was hoping. Cole would grab his wrist and pull him onto the bed and Cole moved past him, opening the closet and pulling out a blanket.

“I’m going to take a nap before I go in and open the store. The studio is upstairs, first door. Look all you want but don’t touch.” The sparkle in Cole’s eyes seemed to tell Matthew he knew just how much Matthew wanted to touch.

The cottage wasn’t that big, but even if it was as big as Matthew’s aunt and uncle’s house, Matthew thought they’d still have heard the banging on the door.

Matthew froze. He doubted Cole had many people trying to beat down his door at six-thirty in the morning.

Oo! Unexpected twist! I'm dead curious to find out who's at the door.

Well, I thought it was Tyler, but I wanted to leave it open for anyone who wanted to pick it up. I totally got confused about what time of day it was in the story.