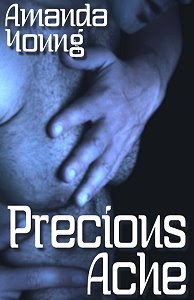 This is the new cover for Precious Ache, due out September 1st at Amber Allure. Isn't it pretty? :)

Dave thought falling in love with an unattainable man was his biggest mistake. Not being able to resist his best friend’s tempting lips was much worse.

Abandoned as a child, Dave Blanchard learned to be self-reliant at an early age. Puberty brought a distressing attraction to other boys, and an abnormal growth spurt that drove Dave further into his shell. Adulthood granted him the freedom to stand on his own two feet, but cloistered him in a plastic bubble of his own making. At seven and a half feet tall, Dave has no problem finding men for anonymous sex through sleazy backroom romps, but the experiences leave him feeling cold and unsatisfied. Although he dreams of love and commitment, finding someone interested in a relationship seems like a pipe dream.

Desperate for companionship, Dave signs up for an online matchmaking service. To his utter embarrassment, his first date never shows, but his luck improves when he runs into a former foster brother, Micah Black. Dave and Micah quickly rebuild their friendship, but with it comes the resurrection of the forbidden crush Dave harbored for Micah when they were teens. Micah is off limits to Dave, but that doesn’t stop Dave’s imagination from spinning torrid scenarios involving his straight friend.

When Micah’s life is threatened, Dave’s inhibitions melt away. Unfortunately, the price of one chaste kiss could mean the end of the friendship Dave wanted so badly.
Posted by Amanda Young at 10:53 AM

What a pretty cover!

Okay, I'm scanning through the basketball player photos in my mind, trying to find a good-looking super tall guy...hmmmmm...

lol; you'll have to let me know what you find, Jen. There are plenty of photos to go through on your group. ;)

All I'm coming up with is Yao Ming and Dirk Nowitzki, and that ain't pretty.

Now...Dennis Rodman I could definitely do...