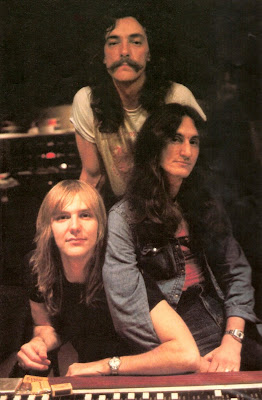 A friend well aware of my complete devotion to Rush sent me this allegedly rare pic that's making the Rush fan board rounds. While the band has been photographed often over the last 30+ years, I find I prefer the days of long hair and pornstaches, though they all have aged rather well. This shot I love, particularly for coyly linked arms. A few of us manlove gals on my favorite message board have speculated aplenty about hidden meanings there. :) A few days after I received this picture, an e-mailed slash story appeared in my inbox. Yowza.

Used to be that a female Rush fan was as rare as the Siberian tiger. Our numbers are growing, but it's taking time. At the DC show last month, I could still walk into the ladies' room without having to wait in line. That part I don't mind not changing. Yet, the growing fandom among women my age has led me to wonder about existing slash fanfic. I did a search and found Rockfic Press, which specializes in band fiction. No Rush, but if you want Police or Metallica slash you've come home. There's even some Motley Crue in there somewhere. Can't even begin to picture that.

As for writing news, I am considering a contract with a top eBook publisher for a novella which features a bi-MMF relationship. The book is called Excitable Gals and might spawn more stories in that universe if successful. The publisher had noted to me, too, that would like to see more stuff, so I plan to finish an M/M novella set in the Surveillance universe. I had originally intended it to be a Phaze Urban title, but as it's not a Dareville story I will shop it first. In Dareville news, I've started work on Daring Red, the first M/M story in this series. The prologue is finished, and since I have completed another short for Phaze I now have more time for Red.

If I can just stop staring at this picture.
Posted by Leigh Ellwood at 9:38 AM