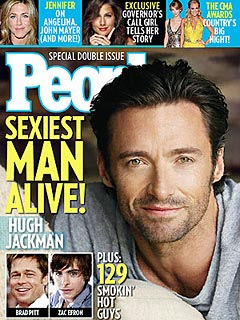 We can all rest easy now, People Magazine has made its choice. I certainly won't dispute it, and I haven't seen the issue yet, so I'd be curious to know who's in the close but no cigar category. I can think of several worthy candidates myself, perhaps think of them doing naughty stuff...sorry, been a rough week here.

Speaking of sexy men (we were) and sexy manlove (we are now), there's still time to pick up Phaze's selection of M/M romance for 25% off using the code BIGFOUR. That's four for years, not inches, mind you. Phaze launched this month in 2004, but did you know that it took almost a full year until their first M/M title was released? Really, I had to look it up, as it happens it was my Halloween short, Jack of Hearts, that made it to the catalog first. I think by then we had a few more M/M titles under contract, but it really wasn't until 2006 when the subgenre bloomed. As this year closes, it's stronger than ever.

Jack was an unusual story to write. I had read quite a bit of GBLT fiction in the past, more mystery than romance, and thought it would be a kick to write a sexy short for Phaze's Shiver line of spooky tales. The concept of reincarnation has always fascinated me, though the jury's still out on whether it's true, so I took what I knew to create the story of an immortal searching for a past love in her latest incarnation. But guess what? Heh. Gotta love karma.

Of course, there is a follow-up, Jack of Diamonds, and I had intended to write more in the series. I had a storyline for Jack of Clubs but fate intervened and the project slipped away. I'm wondering, given how much time I've let lapse, if it would be worth it to write more. They say a new book revives interest in the backlist, so it's always remained in the back of my mind to try. We'll see.

Posted by Leigh Ellwood at 8:47 AM