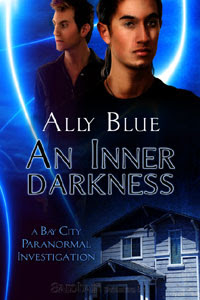 An Inner Darkness, fifth book in my Bay City Paranormal Investigations series, is now available from Samhain Publishing! This is the last book in the main series arc, but NOT the last book with BCPI. Dean's story comes out in January, and I'm already planning Adrian's story in my head. For when he grows up, of course :D

All hell’s about to break loose. Literally.

After more than a year as a couple—and plenty of bumps along the road—Sam Raintree and Dr. Bo Broussard are finally settling into life together. Bo has come to terms with his sexuality, their business is thriving, and Sam has begun to accept his role as a step-parent of sorts to Bo’s sons, Sean and Adrian. The only real dark spot is Bo’s ex-wife, Janine.

When eleven-year-old Adrian begins exhibiting signs of psychokinesis—the same ability which allows Sam to manipulate interdimensional portals—the friction between Sam, Bo and Janine escalates. Sam and Bo have reason to believe Adrian’s raw, uncontrolled talent poses a danger to him and those around him. Janine, however, believes Sam and Bo are encouraging dangerous delusions on Adrian’s part. Common ground is nonexistent, anger and hard words ever-present.

Caught in the middle of the conflict and burdened with an ability he can’t yet control, Adrian is soon pushed beyond his limits. With Adrian’s mind—and the lives of everyone around him—hanging in the balance, Sam and Bo race against time to save both boys and keep an otherworldly horror from breaking free.

Click here to read a PG excerpt and buy the book. Read on for an XXX-cert! Heh *g*

Adrian fell asleep in the truck halfway to Sam and Bo’s apartment. Bo carried him inside. Sam trailed behind with Adrian’s duffle bag. He set it beside the bed while Bo pulled off Adrian’s sneakers and tucked him under the covers. Bo pressed a gentle kiss to the boy’s forehead before following Sam out of the room and closing the door.

They brushed their teeth and changed out of their clothes without speaking. Sam had to remind Bo to take his anti-seizure medication. Bo took the capsules without argument, but it worried Sam that he’d forgotten. He’d been taking them ever since his seizure back in May, and hadn’t forgotten once until now.

When they switched off the light and climbed into bed, Bo still hadn’t said a word. Worried by Bo’s silence, Sam slipped his arm around Bo’s waist and molded his body to Bo’s back. “Are you all right?”

“No. I’m afraid, Sam.” Bo turned to look at Sam. His eyes glittered black in the low light bleeding through the curtains. “He’s safe tonight. But what about tomorrow night? And the night after that? What’s going to happen to him and Sean, if we can’t protect them?”

Sam’s heart twisted. He tightened his arm around Bo. “We just have to take it one day at a time. Do the best we can.”

Bo nodded, his hair tickling Sam’s face. “I know you’re right. It’s just so tempting to take them and run. Just get them both the hell out of here before…”

He didn’t finish the thought, but he didn’t have to. Sam kissed the shell of Bo’s ear. “You know we can’t do that. It’ll just put the kids in worse danger in the long run.”

“I know.” Bo drew a shaking breath. “God, I don’t know what to do. I’ve never felt more helpless in my life.”

A great fist seemed to close around Sam’s chest. He wished he could take away the despair in Bo’s voice.

“Try to sleep,” Sam whispered in Bo’s ear. “Things’ll look better in the morning.” It sounded false even to himself.

Bo let out a harsh laugh. “I can’t sleep. Right now I feel like I’ll never be able to sleep again.”

With no idea what to say or do, Sam buried his face in Bo’s neck and rubbed his hand in soothing circles on Bo’s chest, as if he could erase Bo’s fear with nothing but his touch.

Maybe you can, he thought when Bo’s heartbeat quickened against his palm. For a little while, at least.

Sam trailed his fingers lower, over the threadbare cotton of Bo’s T-shirt to the drawstring of the ancient hospital scrub pants he always wore to bed when he felt in need of comfort. A sharp tug loosened the bow. Sam slipped his hand inside and reached between Bo’s legs, cupping his balls in his palm.

“Shhh.” Sam nuzzled behind Bo’s ear. He ran his fingertips over the head of Bo’s cock, which began to swell in his hand. “Just relax. Let me touch you.”

A tremor ran through Bo’s body when Sam’s fingers closed around his shaft and began to stroke. Hooking a thumb into the waistband of his scrubs, Bo shoved them down to mid-thigh. The drawstring dragged over Sam’s prick where it pressed against Bo’s ass. The thin material of Sam’s boxers did not a damn thing to reduce the sensation.

Wanting to feel skin on skin but unwilling to let go of Bo’s cock, Sam used the arm he was lying on to wriggle his boxers down as far as he could. When the garment was out of the way he squirmed until his erection lay nestled between Bo’s buttocks. It felt wonderful, just as it always did. His cock fit perfectly in the warm, welcoming crease of Bo’s ass, and his thighs molded to Bo’s as if they were parts of one whole.

Bo’s hand curved over Sam’s on his cock. “Sam. Please.”

Realizing he’d been lying there simply holding Bo for a couple of minutes now, Sam chuckled. “Sorry.” He began stroking again, swiping the pad of his thumb across Bo’s slit just to hear Bo’s near-silent gasps when he did it.

Letting the movement of his hand fall into a rhythm so familiar it was second nature, Sam rooted into the thick tresses pooling around Bo’s neck and breathed deep. Bo’s hair always smelled so good, fresh and clean as a spring morning. The underlying musk of sexual desire added a familiar lusty kick, the two blending into the scent Sam loved more than any other.

Fastening his mouth to the juncture of Bo’s neck and shoulder, Sam sucked the firm flesh. A hint of salt caressed his tastebuds. He pressed his tongue flat against Bo’s skin to gather as much of the sharp flavor as he could.

Electricity shot through Sam’s insides. He obediently tightened his fingers around Bo’s shaft and pulled harder, faster. Bo growled and pushed his ass against Sam’s groin, and fuck but it felt good. Slipping his free hand beneath Bo’s neck, Sam curled his arm around Bo’s skull. His fingers dug into the silken warmth of Bo’s hair and tugged Bo’s head back, baring his neck for gentle open-mouthed kisses. Bo moaned, the sound low and sweet. His hips rocked, forward and backward and forward again, fucking Sam’s hand and rubbing his ass against Sam’s cock, until Sam was lost in a haze of heat and sensation.

For a while, the only sounds were their panting breaths and the faint squeak of the mattress with the movement of Sam’s arm. Excitement spiraled tight in Sam’s belly. There was something deliciously illicit about lying mostly dressed under the covers, humping against Bo’s ass while he jerked Bo off.