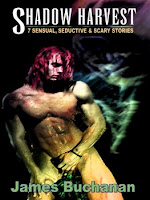 Shadow Harvest
by James Buchanan
Available now from MLR Press
You can buy it on www.amazon.com/Shadow-Harvest-James-Buchanan/dp/1934531545/ref=sr_1_48

Blurb:Do you dream of men who shed their skin? Do spirits and demons whisper innuendo in your ear? Goblins, witches and skinwalkers haunt the pages of these seven sensual, seductive and scary stories. From Navajo cousin-brothers for whom the old stories hold more meaning than most to love spells gone awry in post-communist Russia and nightmare encounters with fallen angels along the Angeles Crest, terror and sex become one shivery tingle down your spine. Give in and let James Buchanan thrill you with his brand of homoerotic horror.

These are previously published (and out of eprint) stories: The Horned Lord, Jack, Sugar Skull, Harvest, Out of the Woods, The Darkness and My Brother, Coyote...available all together in one print volume!

An excerpt from My Brother, Coyote

The blackness of deep morning wound about him. An evil time to be out… a time with no light, dawn was still hours away. ‘Stupid, stupid, stupid’ his own voice chanted in his ears. He should have stayed at Martha’s, but no, it was a family habit just to do stupid things. True dropped his head on the steering wheel and picked at the worn seat cover trying to figure out his next move. The cover’s Indian blanket design of grey and black stripes woven in nylon pulled him in.

An old blanket striped brown on black had covered his brother's shaking form. Seth curled in the back seat of the police car, purple shadows of bruises mottling his cheek and chin. More, new and old, would be hidden under his clothes.

Seth wasn’t really his brother, but his mother’s cousin’s son. Cousin-brothers, that’s how their world defined them. Only an hour separated them in time. Their mothers held hands as Old Woman Vasquez helped bring two boys screaming into the world. Strength and pain slipped back and forth between the women binding their children forever. Ánaaí Seth, atsilí True, big brother, little brother, in the old ways they would have all shared the same roof because they were tied to each other through their mother’s blood.

As True stood by the police car, a low voice came from behind him, “Tick, wanna talk to me about tonight?”

Everyone called him Tick back then. It had started as a joke when they were very young. Someone had asked for True and his mother snapped that they should find Seth because True would be stuck to him like a tick on a sheep. At first the name had bothered him. After a while it just was another name.

He turned his attention to the officer, directing his gaze somewhere below the man’s right knee. Direct eye contact was too personal to share with this man.

“They say you were here.” The officer was a cousin, his father’s sister’s husband’s cousin, not so close as Seth.

True had crawled through the small window into a dank trailer that reeked of motor oil, dogs and mildew. A dingy, narrow mobile home squatted on a plot of desert east of town. Nothing much, but Seth and his Dad called it home. Rank weeds punched through gaps in the skirting. When the wind was up you could feel it thrum under the floor. Seth had sat cross-legged on the mattress, a handful of glossy magazines clutched tightly. Such a prize they had found, kicking around the dumpsters behind one of the bars, dirty magazines. It was as good as candy at Christmas for two teenage boys.

A peek through the half opened door confirmed Martín DelOro, Seth’s old man, was home. They crowded next to each other watching him sprawled in grimy, grey dungarees on the couch. Seth’s dad was half Mexican; the old ways didn’t mean shit to him. Drunk in the front room, Seth’s dad was not one you wanted to be around when he was muy borracho. There wasn’t a time that it hadn’t been so, not that either boy could remember.

Seth closed the door quietly and put his back against the bedstead. Lying on the bed, feet propped against the far wall, True fingered one of the magazines. Pressed so close to Seth, True could smell the wind and sand in his hair.

Seth’s room was hardly more than a closet. Still, he had more privacy than True could even imagine. All of his brothers and sisters slept in the same room. So he came to Seth’s house. It was worth the risk of catching his uncle in a bad mood just to be alone for awhile. Martín’s drinking habits were why they always came and went through the window in Seth’s room.

Voice low so as not to wake the sleeping man, “What’d ya think Tick?” Somewhere from his dad’s mom’s side Seth had inherited golden brown eyes. They flicked furtively over the shiny, black covers with their teasing pictures. Neither had really looked when they found the magazines. There wasn’t time. Just long enough to guess what they had, then grab them from the dumpster and run.

Now, as they flipped through the slick pages, hands damp with excitement, a whole new world exploded before them.

“Whoa crap.” True’s hiss was barely audible. Blonde hair, tan lines and not a whole lot of clothes on those pages. They were all guys, doing things to other guys. Lips touching, hands exploring, mouths and tongues caressing very private places; True had never imagined such things. Then he noticed a blonde on his back with legs in the air and a dark-haired fellow putting himself, well, in there, and suddenly True knew.

He knew why he always wanted to be with Seth. He knew why he got angry and hot inside when Seth flirted with the girls at school. He knew why he dreaded Squaw Dances, with the giggling girls prodded by their mothers to pick good-looking boys like him and like Seth… having to give up his precious nickels and dimes so the girls would leave them alone. Dark desire crawled in the pit of his stomach. Glancing up he met Seth’s gaze. Seth’s amber eyes were hard and hungry. True’s eyes held the same hunger. Both saw. Both dropped their stares. But where their eyes landed was the magazines that told them what they wanted from each other.

Neither could believe what the other’s face said. To commit and say such things was not how they’d been raised. “So that’s what they do to each other?” the words were whispered; giving form to the thought.

“Stick your finger up there and find out,” True teased. Seth’s boot caught him on the thigh, pushed, trying to shove True off the edge of the bed. True punched him back, hitting his hip. Laughs came out as snorts.

Two men were almost kissing in a full page spread. Holding it up for Seth’s inspection, “What do you think they’re saying?”

Crooning, leaning in, “Oh baby, oh baby,” Seth mimicked the soaps on T.V. True pushed his cousin’s face away. Seth grabbed his hand and True tried to yank it back. He kicked and missed.

“Come on, bro, you can do better than that.” Seth taunted him. Holding his wrist, holding his ankle, the older boy wrested him down, pinned him. Both were laughing and True looked in Seth’s eyes… really looked again. You never stared like that, it just wasn’t done. Hunger, need, everything he felt was echoed back.

His free hand found Seth’s chest, up underneath his shirt. Cold fire burned under his palm, Seth’s pulse drumming in time with his own. True could feel it, knew he could touch Seth this way, be with him always this way, never have to lose him this way. True’s gut tightened, spun, and he felt nauseous. A sharp, searing blow smashed the inside of his head. His ears rang with a terrible, high-pitched whine. Large, glowing, a black light burned before his eyes.

Then it was gone and he was with Seth. Peace, no wanting, no pain, just gentle longing and bliss.

Seth leaned in, his rust brown hair brushing True’s cheek. With Seth’s weight heavy on his body, True pulled Seth hard against his mouth. His first real kiss was with Seth. It was moaning and tongues and not breathing at all. Everything had gone hard and throbbing; hormones rampaging between them.

MLR was able to get Marcus Schenkenberg as a model? Verra nice!