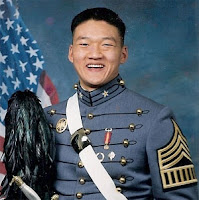 According to the New York Daily News, two gay Iraq War veterans have been arrested for chaining themselves to the White House.  West Point grad and Arabic interpreter, Lt. Dan Choi (currently fighting a legal battle with the military over them attempting to oust him from the National Guard)  was arrested along with Capt. Jim Pietrangelo (who the Pentagon wants to boot),  by the U.S. Park Police.  Both men were protesting the White House's slow movement on repealing the DADT.  Both spoke at the Human Rights Campaign Rally in Washington DC before marching on the White House.

Posted by James Buchanan at 9:00 PM