5 Reasons to Love A Bear 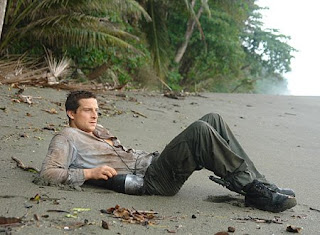 Bear Grylls, that is. Host of Discovery Channel's Man Vs. Wild. Say what you like about the show, or about Bear himself (plenty of people do), the guy is fascinating. Here are the top five reasons why:

5. His history. Among other survival/adventure-type records, he was the youngest Brit to climb Everest, at age 23. And this after recovering from a Special Forces parachuting accident where he broke his back in three places. Would I have been able to do that? Hell no. Of course I don't jump out of perfectly good airplanes either, so maybe it's a moot point...

4. His ability to eat bugs/raw meat/assorted other disgusting things and describe in a calm and thoughtful manner exactly what they taste like. To me, being able to describe the flavor of a ginormous grubworm while its guts are dripping down your chin is an enviable skill.

3. He loves his own pee. Or at least the evidence points that way. He sure does drink it a lot O_O

2. He appears to have no body issues. He gets naked a LOT. In front of a TV crew. I love that, because (other than the whole I-love-nekkid-men thing) I'm in awe of anyone who is that comfortable with themselves. I mean I've been to nude beaches and had no problem with it, but that was different. EVERYONE was naked there. There is no way in hell I'd be comfortable with stripping down in front of a bunch of fully dressed people with cameras.
**thinks**
Hmmm... wonder if Bear's ever done gay porn.
Probably not. Oh well.
But this leads us nicely to the number one reason I love Bear Grylls...

1. His mad gay affair with the cameraman!
.
.
.
okay I made that up. BUT. The camera guy does always shoot Bear's manbits in close-up (blurred out for family viewing, sadly) every time he pees on himself for some reason or pees in his water bottle in order to have a delicious beverage. Thus, I will hold on to my cherished fantasy of Bear and the camera guy doing it in one of Bear's homemade jungle shelters.

Now if only someone could get Mike Rowe (of the Travel Channel show "Dirty Jobs") to take on the cleaning of Bear after one of his adventures. That would be hot O_O

(btw, the half-survivor, half-male-model type picture is from TVGuide.com's Bear Grylls photo gallery. This pic gets the Ally Lick of Approval.)
Posted by Ally Blue at 8:46 AM

OMG, Ally, you're such a nut. LOLOL

Mad gay affair with the cameraman...you know, I'm not ruling this one out. I think there's still hope.

I love that you're so warped. *hugs*