As the Gay Turns

This is an interesting article on As the World Turns' gay storyline. I'm one of the younger (although at 34, I'm no spring chicken) viewers who were lured into watching the show through the handy-dandy numbered YouTube clips. I hadn't watched a daytime soap in 10 years, but I started watching the clips one afternoon last summer and basically said goodbye to the next seven hours as I obsessively worked my way through the storyline. Now I TiVo ATWT every day, and have been sucked into two other storylines as well.

When it became clear in December that Luke and Noah were being censored ("mistletoegate" was a kiss near Christmas that the camera panned away from, focusing instead on mistletoe instead of the boys kissing under it), fans began a successful campaign to pressure show owners Procter and Gamble and network CBS to treat Luke and Noah fairly and allow them to kiss like straight couples. I was one of many who mailed letters and Hershey's Kisses to The Powers That Be. Lo and behold, the Associated Press picked up the story and it received a lot of mainstream media coverage.

Since that momentous third kiss last month, the boys have kissed several more times, and it seems that P&G has finally stopped pandering to the homophobia of a vocal minority of audience members. Sure, the storylines are ridiculous, but it's Oakdale. It's a nutty place. I think the statement that, "on the show gay life doesn’t flourish without intense animosity directed at it" is rather unfair. Granted, Noah's dad is a homophobic nut, and there was one incident on a country road involving some frat boys who were inexplicably cruising for a fight first thing in the morning, but the rest of the residents of Oakdale are very supportive of Luke and Noah.

The author's final statement about sexuality replacing class in the "culture wars" is thought provoking. Is gay the new stable boy? I don't know, but as long as I get to see cute guys rolling around in the hay, I'm happy. 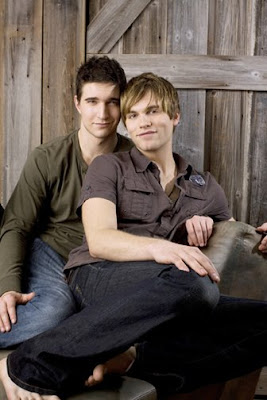 I came to Luke and Noah on ATWT a bit earlier than you did, so I only lost five hours of my life with the clips, alternatively cursing and praising the friend who had linked me.

While it appears that they are starting to be treated like every other couple on the show (plots with more holes than Meerkat Manor, ridiculous writing and shifting characterization) I do constantly wonder how it's possible that any force could have kept two teen boys out of bed for ten months.

All that said, as far as m/m romance on American soaps goes, it's the only game in town. I'm hooked.

Honestly, I thought P&G were milking the 'scandal' for all it was worth. As long as they teased Nuke supporters by withholding kisses, message boards buzzed with fans crying fowl. Meanwhile, they also got publicity from the few pea-brains who actually protested the romance. (Beats the hell out of me why people would protest about a gay kiss, but not bat an eye at seriously bad stuff like guns/violence.)

And, Keira, you were the one who got me hooked on Nuke. Thank you! *g*

k.a., I agree heartily on the lack of sex. I actually don't mind waiting because I love to be teased as a viewer, but come on, two teenaged boys? There should be a lot more barn action going on!

The writing really is ridic, but the actors are so appealing. I'm obviously also hooked. :)

Anne, I'm glad I could spread the obsession your way! *g* And I agree that P&G milked the controversy, although it still worried me. I'm relieved the kiss ban is over!

And yes, isn't that a great pic? YUM.