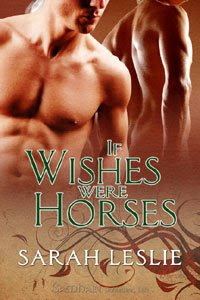 The Fey civil war has ended, but some of the remaining wounds are still raw. Not the least of which is a rift suffered between Alaric, a respected Forge Master, and Lord Valerian, Captain of the Queen’s Guard. Alaric, horrifically scarred during the course of the conflict, feels his disfigurement is an insurmountable barrier between him and his lover.
Alaric’s best friend Lily knows, left alone, Alaric and Valerian will never resolve their issues. She has her own reasons for playing matchmaker, and since patience isn’t her strong suit, she decides it’s time for some gentle interference. The upcoming Reconciliation Ball will be the perfect opportunity, for at this ball a gift will be given to everyone who attends—the granting of one wish.
But Lily isn’t the only one playing a game with other people’s lives. One wish will set in motion a chain of events that will bring them all face to face with the past, the future…and the truth

So this is the blurb for my first story If Wishes Were Horses due for release from Samhain on July 1st and I have a confession to make…it didn’t start life as a male/male.
Lily was a character I had written about before – a stroppy, no-nonsense heroine. The story opens with her stomping – Lily doesn’t walk if she can stomp – through the forest (in a ball gown) on her way to ask Alaric to the Reconciliation Ball.
Great! This was going to be a fairy story with a Cinderfella feel, with wishes expiring at midnight, the healing of old wounds and the discovery of the truth. Trouble was, when Lily arrived at Alaric’s cottage they had literally no chemistry together – Zip! Nada! Zilch! And no matter how I tried I couldn’t get them to work as a couple.
Since coming at it from Lily’s point of view didn’t seem to be working. I decided to see if I could find out what was wrong by looking at it from Alaric’s point of view. It was then that I realized what the problem was. Alaric had already given his heart to another, a captain in the queen’s guard – a male, Valerian.
Okay, I’d been reading quite a lot of male/male. But I have a hard enough time writing m/f love scenes – who’s on top, underneath, which way are they facing, where are their hands, working out which bit goes where. LOL. Did I think I could write m/m? Well I was gonna give it a damn good go. And what for Lily and Alaric was a struggle to write, just seemed to flow for Alaric and Valerian. Lily and Alaric were friends. Alaric and Valerian smoldered across the page.
It wasn’t without problems - the main hurdle to overcome being the inability to distinguish between the couple during the love scenes by using he/she. Boy, you do not realize what a luxury that is ‘til you can’t do it anymore. Lots of frustrated comments back from the crit group. Cries of I can’t tell who’s doing what, followed by lots of head banging on the desk from me.
But I persevered and from being a male/male virgin I am pleased to announce that the story I’m currently working on is also male/male. Yep, I’ve caught the bug. I haven’t forgotten Lily though, that fairy stomping through the forest sparked all this off, and her hero is not the most patient of men.
An excerpt from If Wishes Were Horses is up at Samhain.
http://samhainpublishing.com/coming/if-wishes-were-horses
And I’m blogging here.
http://sarahleslie-silvertree.blogspot.com/
Posted by Amanda Young at 5:00 AM

That part about not being able to tell who was who during love scenes is too funny!

I can't wait ot read If Wishes were Horses :)

Thanks for posting Joy. :)

When you're writing it, you can completely follow what's going on. It's only when someone reads it and says whose hand is doing what where? That you realize how specific you need to be.