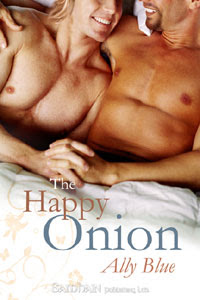 The Happy Onion, that is *g* My romantic comedy-ish novel, coming out July 29th from Samhain. Isn't the cover purty? Anne Cain did it again. I heart you Anne! Mwah!

So, in celebration of this loverly cover, here's the blurb and a spicy excerpt from the book. Hope y'all enjoy it!

Thomas Stone has one sacred rule: Don’t Date The Boss. Ever. So when he finds out his new employer is the man he took to bed his first night in town, he’s less than happy. He doesn’t need any more complications in his life, and the way Phil makes him feel definitely qualifies as a complication. Especially since he can’t seem to keep his hands off the man.

Philip Sorrells is thrilled to discover that the new bartender his manager hired for his restaurant, The Happy Onion, is the aggressive little blond he slept with once and can’t forget. Thom is Phil’s wet dream come true, from his angelic face to his fiery temper. For the first time, Phil hears the siren song of monogamy, and he’s tempted to follow it.

When Thom leaves The Happy Onion for a job managing an upscale nightclub, it looks like a chance for him and Phil to be together without the whole boss/employee thing hanging over them. Instead, Thom’s new position brings out previously unsuspected differences in their world views. Differences with the power to destroy their fragile bond.

So how will this nature-loving tree-hugger and corporate-ladder climber navigate this political minefield in the name of love? Very carefully.

Something was tickling Phil’s nose. Fine, silky threads that smelled like new hay and sex.

He scrunched his face up. The tickle intensified.

He tried to lift his hand to brush the whatever-it-was away. His hand wouldn’t move. Something was wound around his arm, holding it down.

No, he realized with a surge of delight. Not something. Someone.

Thom. It was Thom spooned naked in his embrace, trapping one of Phil’s arms beneath his body and cuddling the other across his chest. Phil’s hand was trapped in the hollow of Thom’s throat.

Smiling with his eyes still shut, Phil buried his face deeper in Thom’s soft, fragrant hair. Thom mumbled something about pancakes and wriggled his backside snug against Phil’s groin before lying still again with a sigh. Phil stifled a laugh in the curve of Thom’s neck. It was so cute how Thom turned into such a snuggler when he slept.

Opening his eyes, Phil pushed up on his elbow—as far as he could manage with Thom on top of his lower arm—and peered into Thom’s face. His eyes were closed, long golden brown lashes brushing his sleep-flushed cheeks. The plump pink lips were parted just a little. He looked even younger than usual, his delicate features as sweet and innocent as a child’s.

Luckily for Phil, looks could be deceptive. Extremely so, in this case.

Speaking of which, Phil wondered if Thom would be up for some morning sex. Or evening sex, he mentally amended after a glance at the clock told him they had in fact only slept a couple of hours and it was now dinnertime.

The thought of dinner made Phil’s stomach rumble. Okay. Sex first, then food.

His plans set, he leaned down and brushed his lips against Thom’s ear. “Bubbles,” he whispered. “Wake up.”

Thom’s brows drew together. “Go ’way,” he grumbled, rendering his own request impossible by tugging Phil’s arm even tighter across his chest. “Wanna sleep.”

“You’ve been sleeping for the last two hours. I want you to fuck me again.” Phil thrust his swelling prick against Thom’s rear. “Please, sweet thing? I’ll bring you dinner in bed.”

“That’s it.” Thom’s mouth curved into a sleepy smile. “I like how you say that. It’s fucking hot.”

“Yeah.” Thom pushed Phil’s hand downward until the palm rubbed against his crotch. He was every bit as hard as Phil, and he moaned when Phil curled his fingers around the shaft. “It turns me on when you call me that.”

“Hmm.” Phil traced the edge of Thom’s ear with his tongue, chuckling when Thom squealed and tried to squirm away. “Well then, sweet thaaang,” he purred, deliberately accentuating the drawl in his voice. “Since we’re both evidently up for it, how about you fucking me before dinner?”

Thom turned his head to capture Phil’s mouth with his. The kiss was brief, but sizzling. Phil moaned, fingers tightening around Thom’s shaft.

“I have a better idea,” Thom murmured, and nipped Phil’s bottom lip.

To Phil’s shock, a rosy blush crept into Thom’s cheeks. “Iwantyoutofuckmethistime,” he mumbled, the words rushed and uncharacteristically self-conscious.

“Sorry, what?” Phil wasn’t about to take it on faith that he’d actually just heard what he’d thought he heard. If he acted on it and it turned out he was wrong, Thom would probably cut his balls off with a butter knife.

A crease appeared between Thom’s eyes. “I. Want. You. To. Fuck. Me.” He glared at Phil, as if daring him to be his usual teasing self right then.

Phil flirted with the idea of deliberately pissing Thom off, but let the urge pass without acting on it. Hot as it was when Angry Thom fucked him so hard he walked bowlegged for a week, he wasn’t about to pass up what he suspected was a rare opportunity. Not because he was dying to fuck Thom. He was perfectly happy to let Thom top him every single time. No, he wanted this because Thom did, and as far as Phil was concerned, what Thom wanted, Thom got. Besides, Phil couldn’t deny that he wanted to experience every possible facet of sex with Thom.

He knew himself well enough to know what that meant. It made him happy, even knowing Thom might not feel the same.

Letting go of Thom’s prick, Phil slid his hand between their bodies and dragged one fingertip up the length of Thom’s crease. Thom moaned, and Phil smiled.

Thom’s head came up, flicking the hair out of his eyes. Flashing a smile that made Phil’s heart thud painfully against his sternum, Thom reached beneath his pillow and drew out the three-quarters-empty bottle of gel they’d been using earlier. He handed it to Phil without a word.

“Thanks.” Phil pressed the pad of his thumb against Thom’s anus for a second before worming his other arm out from beneath Thom’s body. He sat up, the lube clutched in one hand and the other palm splayed against the curve of Thom’s hip. “Roll on your stomach for me.”

Somewhat to Phil’s surprise, Thom did as he was told. Kicking the bedspread aside and shoving the pillow out of the way, he turned onto his front, slender legs parted slightly and both hands curled near his shoulders. His cheek rested on the sheet, heavy-lidded eyes watching Phil with unveiled desire. His skin glowed nearly pure white against the emerald green sheets.

Phil’s throat tightened. He ran a hand down the length of Thom’s spine to cup one firm ass cheek in his palm. Part of him longed to wax poetic about the man’s almost-ethereal beauty. But a larger part of him didn’t want to ruin the moment by turning into a girl, so he decided to keep his inner Keats to himself for the time being.

Rising to his knees, Phil shuffled across Thom’s legs, pushing those fucking gorgeous thighs apart so he could kneel between them. He bent and pressed a kiss just above the swell of Thom’s ass. Thom hummed, hips lifting toward Phil’s mouth like the potted cactus in Phil’s bathroom seeking the sunlight.

Phil smiled against Thom’s skin. “You want me to eat your ass, pretty baby?”

He lowered his face and drew a deep breath. Thom smelled like sweat and come, ripe and dirty and God, so fucking sexy. Fingers holding Thom open, Phil dragged the flat of his tongue across the tightly furled opening. The salty-bitter taste went straight to Phil’s crotch. He groaned, Thom echoed the sound, and Phil wondered if a guy could possibly come just from that sexy little noise.
Posted by Ally Blue at 7:25 PM

Damn. That's the one I already read. Lovely cover. Anne is brilliant. I can't wait to read it.

Wow, can't wait to read the book. The excerpt and the cover are both Hot!!!

LOL! Thank you! There's a different excerpt on the Samhain website :D
http://samhainpublishing.com/excerpt/the-happy-onion

Hi Lily, thank you! I had fun with this one, Thom and Phil were a real blast to play with :D

(Would it be really rotten of me to gloat about you letting me have a sneak peek at HO while doing the cover? Too bad! It's AWESOME! Phil and Thom are just the SWEETEST couple--I adore them and can't wait for the story to go on sale.)

Amanda, thanks! I had fun delving into the more lighthearted area of Manloveland *g*

This looks soooo hot. Yes, definitely buying this one.