A Peek at the Reaper and a Free M/M Story 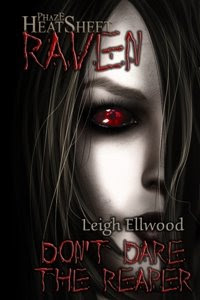 Scroll all the way, there's some good stuff.

Happy 4th of July! What better way to celebrate the holiday than with a sneak preview of a Halloween short? While I'm at the beach all day today, enjoy this snippit of the forthcoming MMF story, Don't Dare the Reaper, coming from Phaze Books.

He approached them slowly, hands behind his back and nodding a greeting. He looked non-threatening, but Cal kept Sue close to his side nonetheless. For all the good it might do, they were naked and defenseless—yet wasn’t embarrassed by it. Cal doubted, too, he’d acquired any superpowers in this state, and he didn’t know that this guy wouldn’t morph into a multi-fanged, drooling demon and devour them both.

“Cal, Sue,” the man said. Well, at least somebody knew what was going on here.

The man chuckled. “No, you’re not there, either. Relax. You can call me Gil, though it’s not really my name.”

Cal arched an eyebrow, but Gil continued, “I go by so many, seems every culture calls me something different. I don’t believe there is a Western moniker attached to what your society refers to as the Grim Reaper.”

The Reaper? “But you just said we weren’t dead, why would you be here? And where is here, exactly?”

“Is this Purgatory?” Sue asked.

Gil shook his head. “No, you’d definitely know if you were there. Here,” he rocked on his heels and craned his neck upward, “I suppose you could say you are in Limbo now.”

Cal scoffed. “How could this be Limbo? You put things in Limbo it isn’t Limbo anymore. It’s a place.”

Gil brought his hands together in front of him and clasped them loudly. “You know your Carlin, bravo.”

“Yeah, big fan. He was an atheist, I understand. Where did he end up?”

Gil didn’t answer, but instead extracted a switchblade from his back jeans pocket. He chuckled when Cal tightened his grip around Sue’s shoulders and back. “Don’t panic, I’m not here to rumble,” Gil assured them. “I just thought you’d like to see what’s going on right now.”

Gil cut wide swaths into the air—parallel lines up and down. Cal swore he could hear fabric sliced into ribbons and sensed Sue stiffen in his embrace when Gil reached to one side and pulled away a patch of black.

The darkness fisted in Gil’s hand and crumpled into a thick veil, revealing an active screen. No longer intimidated by the so-called Reaper, Cal stepped forward to better see the events played before them.

Onscreen, strobe lights illuminated the two-lane highway where they had crashed. Sue’s modest sedan resembled a demolition derby victim, with detached front and rear bumpers, cracked headlights, and a destroyed cab. The impact at both ends had created an obvious accordion effect, and assuming either one of them lived, driving the car home would definitely not be an option.

“Cal, look.” Sue pointed to the right corner of the screen. Through the spider web pattern of shattered glass still held in the rear windshield, he saw a body slumped in the driver’s seat. Beyond that, a hole in front glass implied the fate of the other passenger—him.

Sue’s belt held, apparently, but he had been ejected. Cal softened his touch and stroked his wife’s back. Surely if he could feel a heart beat now, it would have stilled in fear. No way in hell would anybody survive something like that.

They watched firemen pry apart the twisted metal, and EMTs prepare stretchers and equipment. Yet before Cal could better see the extent of damage done to their bodies the view panned to one side to reveal the other cars involved. Both appeared equally, if not more, destroyed.

From behind the SUV rolled a stretcher, carrying a shrouded body.

“That, my friends, is what dead looks like,” Gil said without humor.

It just wouldn't be the Fourth of July without some fireworks!

First up, I have a free 4th short available at Phaze Books, All Romance eBooks, and Smashwords called In-Dare-Pendence Day. Come on, how could I not use a title like that? I promise you the story isn't that punny.

As Dareville celebrates the nation's independence, so Redding Marbury has cause to enjoy another kind of freedom. What he has to reveal to his lover Jared Wilton helps make for an incredible first holiday together.

This is another teaser for Daring Red, which I swear is coming soon. For now you can get ID at Phaze, ARe, and Smashwords.

Also, Phaze Books is having a July 4th sale. All eBook and print are 30% off with the code FIREWORKS09. You can use the code through July 6th, so you have plenty of time to shop. Normally we do holiday sales on the exact day, but lately we get mail from international customers who don't hear about the sale until it's too late. This way, everybody has the opportunity to save. Enjoy!

Posted by Leigh Ellwood at 7:54 AM