By now you've figured out that I'm a theatre geek, right? Okay. So. A friend and I went to see a musical last week called "Zanna, Don't!" (The original was an off-Broadway smash starring Jai Rodriguez.), and I gotta tell ya the show was excellent. The story is set in Heartsville High School in a world where gay is the norm, the captain of the chess team is a sex symbol, and of course the new quarterback will be in the school musical because what kind of school would it be if the quarterback wasn't in the school musical? And then there's Zanna, a high school cupid with a magic wand who can't make people fall in love, but he can help them along a little when they do. Of course, things aren't perfect in Heartsville. When the students put on a brand new musical about straights in the military called "Don't Ask, Don't Tell", two students--a boy and a girl!--fall in love--::Gasp!::--and are faced with anti-straight prejudice. 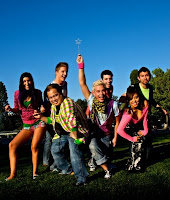 This is the kind of story that can go hideously wrong--in the writing, in the acting, in the direction--but it never does. The script is tight and charming and smart and heartfelt, and the production I saw was played with absolute honesty and commitment to the characters and their story. At times it was so honest that it was downright painful being taken back to that hormonally overloaded time when all love is love at first sight and you're sure it will last forever so you're crushed when it doesn't. When you have to do the horrible "does he/she like me?" dance of social awkwardness. When emotions are IMMEDIATE and everything is IMPORTANT and if they don't like you back you're gonna just DIE! ... Yeah. ::shudder:: Painful. But at least it has a great soundtrack this time.

If you get the chance to see this show in your town a) make sure to go check it out, and b) I hope it's as good a production as the one I saw. They really rocked it! Where else can you see a boy singing a song to his magic wand, a quarterback catch his own pass, and a pogo stick double as a bucking bronco? And it all seems perfectly sensible. ;-)
Posted by Maia Strong at 11:20 AM

I had the chance to see this in Dallas several months ago. The troop used several high schoolers to complete the cast. So, the angst was there is spades. I agree this is one "not to be missed!"

I'm so pleased to find someone else who's seen and liked this show! And I love that they used high schoolers to fill out the cast. :D I have a good friend who teaches children's theatre, and she said her students want to do the show. Unfortunately, there's bound to be some narrow-minded parent who just couldn't handle it and would throw a fit. ::rolls eyes::

Thanks for the rec! It sounds great.

I'm just helpin' out Zanna by spreading the love around. ;)