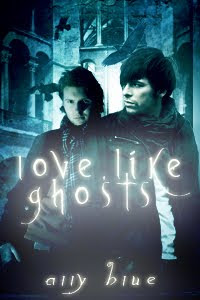 Love, Like Ghosts is the latest installment in my Bay City Paranormal Investigations series, and it's available now in ebook from Samhain Publishing. Read on for the blurb, a link to a PG excerpt (chapter one, or most of it) and a spicier smooching excerpt *g*
Enjoy!

Truth. Lies. A century-old mystery. What a tangled web…

At age eleven, Adrian Broussard accidentally used his mind to open a portal to another dimension. Now, ten years later, he’s successfully harnessed his strong psychokinetic abilities. In the process, he’s learned the lessons which have become the guiding principles of his life. Absolute truth. Absolute control. Always.

Sticking to his personal code of ethics has never been a problem, until two chance meetings—one with a hundred-year-old ghost, one with a handsome, very-much-alive man—turn his orderly existence upside down.

Having grown up in a family of paranormal investigators, Adrian is intrigued by the spirit of Lyndon Groome and determined to solve the mystery of his death. Greg Woodhall, however, affects Adrian in unpredictable ways. Not only does his every touch challenge Adrian’s hard-won control over his abilities, his company quickly becomes a light in Adrian’s lonely life.

As the mystery surrounding Lyndon’s death turns sinister, Adrian’s relationship with Greg deepens into something serious. Something Adrian wants to keep. But intimacy isn’t as easy as honesty, and when the heart’s involved, the line between right and wrong can blur.

Read a PG excerpt and buy the book here.

By the time they left the restaurant the temperature outside had dropped at least ten degrees, the predicted cold front slinking in on a stiff breeze. Remembering how good it had felt to hold Greg close before, Adrian used Greg’s shivers as a reason to wind an arm around his shoulders as they walked. Greg pressed against him, left arm sliding around his waist. They both knew the cold was only an excuse, but for once Adrian didn’t care. He liked the warmth of Greg’s body at his side, the way Greg’s hip bumped and swayed against his as they walked.

Turning his head, Adrian dared to nuzzle Greg’s silky curls. They smelled fresh and clean, like he’d just washed his hair. Greg hummed and rubbed his head against Adrian’s face like a cat. Adrian laughed. He had no idea whether to blame the wine, Greg or his resolve to let go of his own reins for a change, but he felt freer than he had in years. Possibly his whole life.

When Greg’s dorm came into view, Adrian slowed his pace. He didn’t want the evening to end. There would be other dates. He had no doubt about that. But Greg fit perfectly beneath his arm, and he didn’t want to let go yet.

Greg pulled him aside into the shadows just before they reached the steps to the dorm door. His arms slipped around Adrian’s waist, pulling their bodies flush against one another. “Adrian. I know I promised not to try anything, and I won’t, but…” He brushed Adrian’s cheek with his. “I want you so much right now. I don’t want you to go.”

Adrian swallowed against his hammering heart. “I…I want you too.”

Greg’s breath huffed against Adrian’s ear. “Come inside with me. My roommate’s staying with his girlfriend tonight.” His palms splayed open on Adrian’s back, fingers digging in. “God, I really want to be alone with you.”

The naked desire in Greg’s whispered words made Adrian’s knees weak. He rested one shaking hand on Greg’s hip and cupped his cheek in the other, forcing him back until they could look each other in the eye. Even in the near-dark, the fire in Greg’s eyes came close to destroying Adrian’s resolve.

“Not tonight.” He traced the line of Greg’s jaw with his fingers. “I’m sorry.”

Greg let out a breathless laugh. “Can’t blame a guy for trying, huh?”

Adrian ran his thumb across Greg’s lips. They felt incredibly soft. Heart fluttering like a hummingbird’s wings, Adrian leaned closer. Greg’s gaze caught his, eyes heavy-lidded and full of heat. Sliding his hand upward, Adrian tangled his fingers into Greg’s hair and brought their mouths together.

The instant their lips touched, Adrian’s power flared inside him. Electricity licked the curve of his skull, skated along his skin and crackled in the air. His cock filled so fast it hurt.

On fire with a lust stronger than he’d ever felt before, Adrian licked at Greg’s lips. Greg’s mouth opened with a soft, needy sound. His head tilted, his tongue curled around Adrian’s, and Adrian’s tenuous control slipped another notch. His hair lifted and swirled in a wind that didn’t come from the world around him.

Groaning into Greg’s mouth, Adrian skimmed the hand on Greg’s hip around to give his ass a hard squeeze. Greg responded with a low moan and a roll of his hips, and God he was hard already, as hard as Adrian, and why weren’t they in Greg’s bed right now?

You know why. Get a hold of yourself.

Summoning his years of hard-won discipline, Adrian planted both hands on Greg’s shoulders and forced himself to break the kiss. Greg whimpered in protest, grasping at Adrian’s arms with both hands. “No. Don’t stop.”

“Have to.” Adrian’s words emerged rough and breathless. He framed Greg’s face in his palms and stared into Greg’s wide, glazed eyes. “I told you before, I don’t do casual sex.”

Greg laid his hands over Adrian’s. His gaze bored straight through Adrian’s skull. “There was nothing casual about that kiss, and you know it.”

Fear spiked through Adrian’s blood. Did Greg know? Had he somehow figured out that Adrian possessed psychokinetic powers, and that Greg’s touch caused them to rage out of control?

No. Because if he knew, he’d understand that you can’t possibly take him to bed until you can control what happens. If one kiss makes you lose it like this…

Silence. Adrian caressed Greg’s cheeks with his thumbs. Overhead, the rising wind tossed the trees’ branches and wailed around the corners of the building. Adrian could feel Greg’s breath against his lips, warm and scented with the Kahlua cake they’d shared for dessert. Fighting off the urge to taste it straight from Greg’s tongue took everything Adrian had. He licked his own lips instead, wishing he could kiss Greg again and do it right this time. Take it slow. Savor the feel and smell and taste of him.

“Okay,” Greg whispered at last. His hands dropped to Adrian’s chest and moved sideways to fist in his jacket. “But if you won’t go to bed with me tonight, the least you can do is kiss me again.”

Adrian couldn’t help the laugh that bubbled up. Opening his eyes, he drew back enough to smile at Greg’s frown. “You read my mind.”

The corners of Greg’s mouth turned up. “So get on with it, Casanova.”

Maybe it was because he was prepared for his body’s reaction. But this time, when Greg’s mouth opened under his and their tongues slid together, the power that surged through Adrian’s body no longer felt overwhelming. His heart still thumped too fast, his limbs still shook and his cock still felt full enough to burst, but he was able to disperse the excess energy harmlessly into the ground at his feet. He buried both hands in Greg’s hair and drank in the sweet taste of his mouth, his tiny whimpers, the way he clung to Adrian as if he’d fall down otherwise.

It was never like this with Christian, Adrian thought, dazed, as he and Greg pulled apart several long, glorious minutes later. He stared into Greg’s eyes, feeling as lust-drunk as Greg looked.
Posted by Ally Blue at 8:24 PM