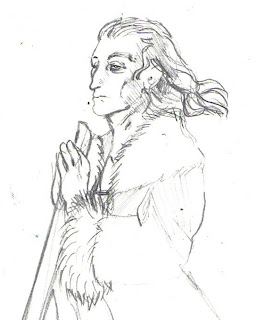 Many people probably don't know that at one point I had no aspirations to be a writer but was very interested in the visual arts. I wavered between taking a degree in journalism or one in commercial art. But in the end fine arts are no way to make a living and commercial arts looks, well, dull. Nevertheless, I still do get the art supplies out from time to time and you can see some of my stuff here on Epilogue.net.

So when I envisage my characters it is not with reference to any existing actors or models, or outside photographic sources. From the beginning I would tend to sketch them out myself, to the best of my admittedly limited ability. For example this guy on the right here is Merlin from my very first novella "Alas, the Red Dragon" (Merlin/Arthur slash). This novella was my first step away from fanfiction, moving to a copyright free character that is open to extensive re-shaping. 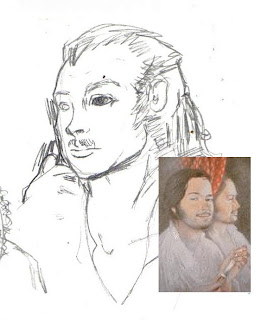 And on the left we have the hero of my first fully original novel 'The Broken Sword'. He wasn't a conventionally handsome guy but the interesting thing was that he bears some relation to the eventual cover art by James McPartlin (see full size here). This cover is in fact a portrait of me, thinly disguised as a male character. Mary Sue, anyone? Well, the character 'Deon' is not very idealised and widely loved--in fact he is deeply flawed and most of the other characters don't like him at all--but I probably did identify with him more than any of my later protagonists. So I wonder if I was unconsciously sketching his similarity to me from the beginning?
Posted by veinglory at 11:31 AM