Out This Tuesday: Man Candy 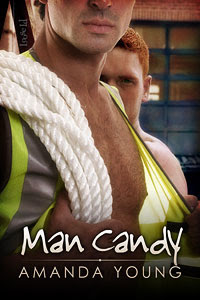 Man Candy
ISBN: 978-1-59632-491-6
Available June 19th at Loose ID
Click Here To Buy!
Aaron Samuels has a secret. He is in love with his boss, Logan Remora. Logan is everything Aarons ever wanted in a man, except he’s straight…and married.


College student, Aaron Samuels is in love with his boss, Logan Remora. After four long years of working under his boss in every conceivable position except the one he wants, bent over the desk with his pants around his ankles, Aaron is ready to give up and move on to greener pastures.

A promising job offer right after graduation seems like fates way of kicking Aaron in the ass. He turns in his notice at work with a heavy heart, though Aaron knows he has made the right decision. After all, he could not spend the rest of his life mooning over Logan.

A torrid, late night tryst with a man Aaron believes to be Logans twin propels him into an emotional tailspin of guilt and confusion. Tough choices loom on the horizon, but Aaron may find that things are not always as they seem.

Aaron spent his evening at home, in his cramped efficiency apartment with only his host of plants for company. One-sided, rambling conversations abounded as he watered his treasures -- a plethora of fern species, an English ivy, and his favorite, a flourishing mother-in-laws tongue -- and talked to them about things he’d never tell another soul.

At midnight, feeling tired but restless, Aaron finally stripped down and crawled into bed. Lying on his lumpy futon and unable to sleep, he rolled over onto his back, squeezed his eyelids shut, and imagined he wasn’t alone. That the man he loved was beside him, holding him close. If he concentrated hard enough, he could almost feel the ghostly touch of Logan’s thick forearms wrapped around him, work-roughened hands exploring his chest and tweaking his nipples.

Said nipples peaked, aching to be touched, and Aaron answered their call, pinching each puckered bit of flesh with just enough pressure to add a sharp bite of pain. Some men didn’t have sensitive nipples, but Aaron did. He loved to have them played with, sucked on. His licked a finger and twirled it around one small bud, wishing it was Logan’s tongue. Imagining how good it would feel if it were.

Fingertips trailed lightly down the midsection of his torso, gooseflesh rising in their wake. They smoothed over the rise and dip of one hipbone, skirted around his cock, and cupped his balls, rolling them in his palm. He added a bit of pressure, squeezing the delicate orbs lightly.

He placed his feet flat against the bed and spread his legs, pushing up. The hand fondling his nipple digressed and followed its counterpoint down his abs to the base of his cock, ringing it loosely. One last rub to his balls and his fingers moved backward, caressing the soft skin behind them, pressing in on the root of his cock, where it could be felt beneath the skin.

Aaron tilted his head back and bit his lip, losing himself in the sensations wracking his body. In his mind, it wasn’t his hands working him to completion, but Logan’s.

Contrary thoughts flittered through his mind, interrupting his pleasure for a fraction of a second. What would it be like to fuck someone he loved, who loved him in return? Would Logan be a snuggler and hold him close while they made love?

In Aaron’s imagination, he did.

Logan’s heat would surround him, his larger body enveloping Aaron’s slighter form. With Logan’s touch would come an innate sense of belonging, of being part of something bigger than himself. For once, it wouldn’t be about the mutual race to get off, but about pleasuring his partner and receiving the same in kind.

Oh, how he longed for that experience.

A soft hand pumped his cock. Fingers fisted around the base of his prick and pulled, adding snug friction. Inching upward, they contracted around the swollen flare of his cockhead and squeezed. The tip of a thumbnail pressed down into the tiny, weeping slit, prompting more moisture to flow. Its pad collected the silky tears and rubbed them over his bulbous cap, teasing the hidden nerves to life before pulling the remaining moisture down his shaft, coating his cock in satiny wetness.

Stroke. Tap. Thumb swirl. Over and over.

The fingers pressing into his perineum moved away. He sucked them into his mouth, wetting them with his saliva. They returned, tips grazing over his hole, teasing.

The taut ring of muscle fluttered emptily, aching to be filled. A single digit filled his need, pressing inside to the first knuckle. His hips lifted, seeking more, and a second joined the first, stretching him open, burning as seldom-used muscles parted and allowed them in deeper, all the way to the webbing.

A low moan bubbled up in his chest and escaped his lips, ricocheting loudly in the still bedroom. The desperate sound echoed back to his ears, driving Aaron to move faster, pump his hips forward and back. Revel in the feel of a tight fist stroking his cock, the pair of fingers twisting inside him, stretching his ass.

Logan’s image -- his dark penetrating gaze, stern pink lips, and stubborn chin -- flashed through the forefront of Aaron’s mind and made him whimper. A fingertip glanced over his prostate, making his balls contract and release. Orgasm slammed into him, making him tremble, wracking his body with shudders as his creamy essence spilled over his palm and splattered over his rippling abdomen.

With Logan’s name on his lips, Aaron came.

As the final tremors subsided, leaving him weak as a kitten, an unintelligible emptiness filled him. His nose began to burn, signaling tears that he forced away by sheer will. His fantasy left him feeling drained and lonely, worst than he’d been to start with.