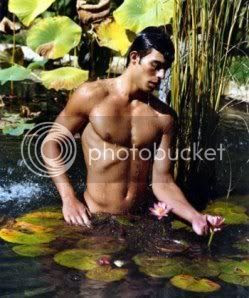 And now on with the show...

"I'm sure your friend can finish you," he said to Jaxon before wrapping wrapping one bulging arm around Luke's waist and pulling him free from Jaxon's body.

Luke sucked in his breath half in fear half in anticipation when the living god carried him with the ease a father would carry a child. More blood rushed do this already hard cock when the god waved his free hand and caused an alabaster pedestal to appear. He set Luke upon it then slowly began to stroke his own long hard cock, his gaze never leaving the moral man before him.


Luke was aware of his friends, quiet gasps as the god's cock grew impossibly thick and long and Luke found himself squirming on the cool alabaster, his hole twitching, his cock as hard as the stone beneath him. Luke could only star, his pulse racing like mad, his body craving everything he glimpsed in the intent gaze that held him spellbound.


It was as if in a dream he felt his legs lifted high and spread them wide moments before a hot stream of slippery come hot his tight opening. Without a word, the god thrust forward and buried himself to the hilt in Luke's tight ass, his cock still spurting, coating Luke's passage.

Luke cried out and the cry melted into a long slow moan as the semen filling him became like the slickest lube. There was no way to compare it to anything he'd ever experienced and he didn’t bother to try. He simply closed his eyes and held onto to the edges of the pedestal and savored the fell of being taken like never before.

Dayum! He's as hot as this story.