A New Release & A Contest 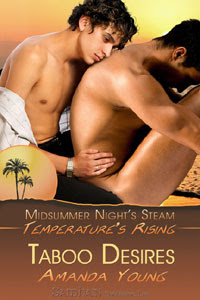 I may be jumping the gun a little here, but I have a new short story coming out on Friday that I want to share. I'm thrilled to annouce the release of Taboo Desires, which is part of the Midsummer Night's Steam series at Samhain publishing.

I also want to offer a contest for all the wonderful readers of this blog. *g* The terms are simple: Just leave a comment between now and Thursday at noon. All you have to do is say hi - or whatever you want - to be entered. Then check back on Friday morning to see if you've won. I'll announce the winner in the comments section of this post.

And now a sneak peek of the story:

When his girlfriend demands he settle down and start a family, Cole Winchester has some hard decisions to make. Marry his girlfriend, or finally own up to his taboo attraction to other men.

Cole Winchester feels like a rat, boxed into a corner. Faced with the prospect of being trapped in a passionless marriage, he makes the hard choice to end his relationship.

A run in with an old friend on the beach, propels Cole’s fantasies out into the open and forces him to confront his taboo desires. Before him, lies the choice of a lifetime—embrace his desire for another man and all the pitfalls that come along with it, or return to his girlfriend and live out the safe half-life he carved for himself.

Must get on friday!

Congratulations on the new release :)

Totally hot excerpt, I can tell I will love this book.

Hi! I've been waiting for another taste since I read Man candy
Congratulations on your new book!

WOW, so Yummy! I so love that cover. I think the cover helps make the book.

Good morning! Thank you all for the comments and congrats on the book. The winner of a free download of Taboo Desires is Ingrid. Congratulations! Please email me at Amandasromance @ aol.com (remove the spaces)with your format preference and I'll send that right out to you.