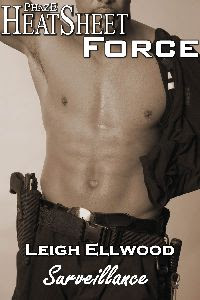 Yes, I'm a rat bastard for missing my Tuesday last week, but I had an excellent excuse as I was recovering from RT. I still am, in a sense. I have a spring cold now. I've become an incoherent mouth-breather, and I'm at a loss. I tried that Airborne stuff that fizzes in water and is supposed to clear up some symptoms. Didn't work. All that expensive acai juice I've been drinking hasn't helped - I thought that stuff was going to make me live forever. Hopefully not with a stuffy nose.

Well, despite the bodyaches and warm skin, I am still excited that Surveillance, my latest M/M work, will be included in the upcoming Phaze Force series. It's the story of an out of work actor in need of quick cash, so he takes a most unusual job working for an absentee celebrity. Fortunately, the cop/security guard remains alert, hee.

Surveillance will be out early July, and the revised The Healing is due next month. I managed to get an extra five thousand words into that one since pulling it from Venus, and given the compliments I've received from proofers I may just persue the prequel I'd planned for it.
Posted by Leigh Ellwood at 9:10 PM