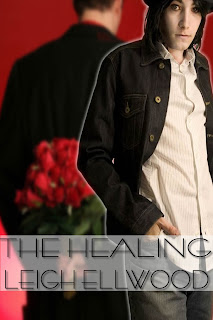 In anticipation of the revised and expanded The Healing, which bows on June 4th, I am happy to offer this preview, a newly added scene to the novella that fared well critically at its former house. I hope for more success with Phaze.

Funny thing, the three releases slated for that day with Phaze are all M/M stories! Look for L.E. Bryce's Ki'iri and Angelia Sparrow and Naomi Brooks' Collared Hearts on the same day.

As he slept, the repressed memory of discovering Dan flooded his unconscious and held him in thrall. Julian floated in his dream as a lidless eye, witness to a multitude events surrounding a sold-out, pre-Jess show. Time and place were irrelevant, minute details forgotten. Everything but those two minutes spent lingering in the tour van behind the velvet curtain that blocked the driver's peripheral view.

He had been about to feed on a young girl, a groupie in a red and white striped tube top who had managed to slip past security without a backstage pass. Of course, being the seventies, such formalities rarely presented any problems. When the Commoners early in their career toured a fantastic love-in followed the path, leaving behind a wake of smoldering marijuana ash, shredded beer labels, and—assuming anyone remembered to use them—condoms, soiled and discarded.

Julian never bothered with protection. Disease couldn't touch him, and a vasectomy negated other risks. Dan's business, of course, was his own…until this night he now relived in REM sleep.

He floated diagonally downward, through the roof of their van, to watch his hippie self dash through the front bi-folding door. The girl was willing, and wasn't going anywhere. He probably didn't need the bottle of red tucked in his compartment—the girl was ready to fuck him and had all but mounted him onstage during the encore. Now, recalling the incident in this state, he couldn't remember what compelled him to get the wine. Insurance, perhaps, to seal her vulnerability and allow him a simple feed that would appear on the outset to be a rock giving a fan an intense love bite.

The interior was dark, illuminated vaguely by the yellowed light from an outside lamp. Julian's consciousness joined his dream body as it slipped quietly inside, startled at first by muffled voices. Having passed the driver on the way over, he could only guess who was crashing their digs. He pulled back the border curtain just enough to permit one eye to view. Shadows danced on the far side of the bus, the windows blocked by masking tape and newspaper—a poor substitute for sunshade, but the perfect screen for projecting silhouettes locked in heated embrace.

Long shadow hair swayed from side to side, in time to rhythmic passion. Dan, of course. Julian had noticed his partner disappeared immediately after their final bow.

Lips smacking against skin broke the silence. Julian's gaze followed the yellowed fingers of light to where they spotted the raised bunk Dan used. Leaning against it, elbows deep in the foam mattress, stood a young man with a ponytail and smooth skin.

Julian's heightened sense of sight revealed more than a normal person might see in this situation. Every contour was visible, from the deeper shadows where his arms and knees bent to the look of pained ecstasy on his youthful face. His eyes were closed and neck tilted backward, exposing a clean, stubble-free throat that smelled as delicious as it looked.

And Dan stood behind him, also unclothed, and grinding his hips into the other's upturned backside. Those same hands that had strummed melodies to rouse a crowd of ten thousand people into harmony now palmed his companion's waist, while he steered his cock in between the young man's rounded buttocks.

"You like how that feels?" Dan whispered. A residual low chuckle rumbled deep from within him, his voice laced with pot recently smoked. Its pungent sweetness pervaded the air. Julian's eyes watered at the extent of it. He didn't smoke it himself, for it nowhere near matched the high of a feed.

"Yeah, man." The other's voice sounded too old for the body that contained it. Maybe an effect of drugs, or maybe the man was blessed with naturally youthful looks. Right now, neither seemed concerned with possible age gaps. All focus centered on the tip of Dan's engorged cock, which Dan guided up and down the crack of the other man's ass, teasing and seductive.

"You gonna fuck me or what?" asked the other man, breathless. As though anticipating the answer, he positioned his legs farther apart, kicking aside Dan's luggage and assorted trash shifted around by bus travel. Julian watched his friend kiss his companion between the shoulder blades, then trail more affections down his spine to the small of his back. Now kneeling, Dan touched his nose to the base of the man's ass and, prying apart his cheeks, dipped in his tongue for a long taste.

He became fused deeper into the dream, as though stepping through a movie screen into reality. Every detail of that night magnified and assaulted Julian's senses. He felt the night sweltering on his skin, inhaled the pungent stench of male sex, and gaped in silent awe as Dan's impressively large cock breached the young man's anus.

He pressed his hand to his heart, and shifted in place as his own shaft elongated and hardened in response. This hadn't originally happened.

Nor did he recall being jealous of the young stranger.

To those of you who enjoyed reading about Julian and Dan, I am inspired to write more now that The Healing has a new home!

Thanks! I would love to write more of these two. I've become attached to the story.