I am not much given to fangrrl moments. I do not have posters of actors on my walls, I don't base my characters on real people, I don't pay very much attention to celebrity culture. But every now and again someone does manage to capture my fickle attention. 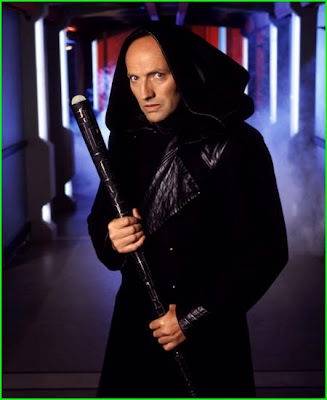 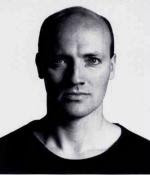 In this case it was an actor in the mangled Babylon 5 spin-off, 'Crusade'. Peter Woodward is by no means hideous but he is not what would generally be considered a 'hot man'. However, I happen to be particularly fond of bald mean with slightly prominent noses and precise diction (a trait he seems to have picked up from father, Edward).

Of course playing a mysterious technomage clad in black and having some great one liners didn't hurt either. My previous favorite character was Avon from Blakes 7 and the parallels are fairly obvious, right down to the not-hideous-but-not-conventionally-hawt actor.

And I guess my preferences peek through sometimes in some of my books such as 'A Heart in Shadows' where our hero Giffen describes the love interest Derek as "every part of him built small and lithe but for a nose that would fit on a normal-sized person. The intruder’s brown hair was a on the long side and artfully cut, his small eyes dark, an indeterminate color..." and "Small, dark, just a little ‘fey’ in the mundane meaning of the word."

But wait for it, I actually do have a point here. Some people might like the same type of guys that I do, others don't. My love interests in other books have included a brawny, tawny town marshall, a small wiry white-haired older man and an ethereal elf. No matter how they looked or how widely they might be considered "hot" the key to writing a love interest is the spark of attraction with the hero. The one great advantage of prose over visual media is that it does not matter so much whether the readers would consider a guy hot, only whether the hero does.

...And if the next love interest I write bears a close resemblance to a certain Mr. Woodward that will be, of course, purely coincidental.
Posted by veinglory at 12:03 PM

I SWEAR I saw the guy who played Avon in Blakes 7 when hubby and I were on our way to a wedding in Oban. It was in the Glasgow Airport about 4 years ago, maybe 5 now.

I couldn't remember the name, and Ll hubby could think of was Dr Who, and I knew that wasn't it. But that dark brooding mien just can't be duplicated in mere mortal men!

Paul Darrow, I think? Most of his still shots suck because his appeal was all in the expressions....